Franconia has only been part of Bavaria since the early 19th Century, and apparently “many of its people do not consider themselves fully ‘Bavarian’ “. Well, that’s the kind of guff Lonely Planet comes out with, but I would say that there is a different type of beer culture here than further down south.

If Upper Bavaria (Munich et al) is about swigging litres in beer gardens, Franconia is more about savouring individual and local styles. It’s estimated that there are around 200 breweries and thousand beers in “Upper Franconia” alone, and you see styles here that you don’t see elsewhere (such as “Rauchbier” (or “smoke beer”)). It’s home to famous brewing towns such as Bamberg, Kulmbach and Bayreuth. Furthermore, people seem genuinely interested in their beer here, and proud of the varieties. Unlike other parts of Germany, where you get strange looks if you ask for a different drink on the second round… 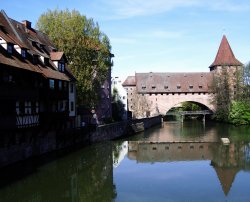 Nuremberg is the capital of Franconia, and a very interesting and beautiful city to visit even if you’re not a beer lover. It’s also very well connected, with high speed links across Germany and excellent local connections to the smallest villages, making it an excellent place to base yourself for a beer holiday.

Nuremberg has two brewpubs, the Altstadthof and Bar Fuesser (see below), and is also home to Landbierparadies, a chain of five pubs (and one large off-licence) selling beer from small breweries in Franconia. We featured them in an article on this blog last month.

This is not a comprehensive guide! I have a feeling most of the best places to drink are probably outside the centre, but Nuremberg is a big old place, and this is just intended to be a starting point.

From Nuremberg station, it’s only a short hop to Kloster Andechs “Das Wirthaus”, in the groundfloor of the Hotel Deutscher Kaiser. This does the full range of Andechs, one of Germany’s most famous monastery brewing corporations. They even do a tasting platter (which takes them a while to put together).

About five minutes further up Koenigstrasse, you get to Barfuesser, a cavernous “Hausbrauerei” and restaurant. They brew two tasty refreshing beers (a dark and a light), which you can see fermenting from certain parts of the beer hall. The food’s pretty good too.

Top of our recommendations has got to be the Altstadthof, in the middle of the old town (up the hill near the castle). This is a cosy brewpub where, on a cold January day, we really fell in love with beer. They brew a Helles, a Schwarzbier, and most special of all, a “Rothbier” (which they translate as “Red beer”). 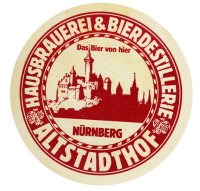 I’m intrigued by how they manage to brew beers which taste so different from anything else, yet are absolutely delicious (and still in accordance with the Reinheitsgebot!). The red beer has a strong aroma of toffee apples, but is also very bitter for a German beer, and possibly slightly sour. It’s not very carbonated (like a lot of beers in this part of the world). It’s incredibly refreshing and more-ish.

It was also pleasing to see (during one of our many afternoon sessions there) the number of locals coming in to buy beer to takeaway. You can go on a brewery tour and even watch a play in the small theatre attached. There’s also a distillery where they make several different types of schnapps.

The closest Landbierparadies outlet to the centre is probably the one on Rothenburger Strasse. It has one draft “landbier” on tap and around 30 in bottles. See our earlier blog for more on Landbierparadies. If you’re hunting for souvenirs, their shop on Galganhofstrasse (about 10-15 minutes walk south of the main station) is an excellent place not just for local beers but also for original stone mugs and glasses at very reasonable (i.e. not touristy!) prices.

Other areas for pubs etc

The area around St Sebaldus church (between the Hauptmarkt and the castle) is a great place for wandering. The pubs can be quite touristy, but it’s a great place for food (particularly Nuremberg sausages). For something different, there’s a trendy cafe attached to some kind of arts centre, near the Rathaus, which has several varieties from the organic Neumarkt Lammsbrau brewery. Unfortunately, we can’t remember the name of the cafe or the street…

There’s also a good area for pubs to the east of Konigstrasse – lots of small bars with beer from local breweries such as St Georgen and Kuchlbauer.

Notes & further links
1. Link to GoogleMap with the above places marked and full addresses.

2. The Franconia Beer Guide is a comprehensive database of the 300 or so breweries in Franconia; it also contains news, articles and a downloadable tour guide. You can upload details of your own beer trips or read other people’s. Very useful.

3. Deutsche Bahn website is very easy to use for looking up train times and even booking fares. If you want to get to Nuremberg by train from the UK, you can get Eurostar to Brussels, and then use this site to get a ticket from Brussels to Nuremberg via Cologne. If you get the connections right, you could get from London to Nuremberg in around 9 hours.

If you are travelling around Franconia, then the “Bayern ticket” is an excellent deal. For 27 Euros, up to 5 people can travel between 9am and 3am the following morning on any local trains. Read here for more.

3 replies on “Nice places to drink in Nuremberg, Franconia, Germany”

At the end of next month I’m off to Franconia. On the last day I could stay around in Bamberg and spend a second day there, or pootle around Nuremberg. What do you reckon?

Ooh, that’s really tough. I’ve only been to Bamberg for a couple of days and would dearly love to go back for much longer; we didn’t have time to get round all the breweries in town (let alone any of those from nearby…) So I’d probably say stay in Bamberg.

That said, if you have your own transport (we didn’t) get yourself down to Nuremberg and stock up at Landbierparadies (we’re not on commission, honest!)

I think the only way out of that dilemma is to vow that you are going to go back and spend a week in both places! How long are you going for?

I’ll only be in Bamberg for a day but apparently we’re going to be taking in every brewery in town – whistle stop tours, certainly.