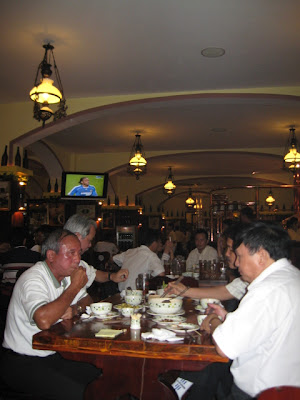 The following post comes from Wei Sen, our man in Hanoi. During his last visit to the UK he told us all about the beer scene in Vietnam, and it sounded so interesting that we asked him to blog about it for us.

The walls are panelled in dark wood, the air is heavy with the smell of hops and cigarette smoke, the tables are crowded with dishes of smoked sausage and fried cheese, and everywhere there are tables of customers throwing back tankards of beer brewed in the on-site microbrewery. It’s not a scene typically associated with Vietnam, but Hoa Vien Brauhaus in Hanoi is part of a number of European style beer halls that have opened over the last couple of years.

There is no doubt that beer is the drink of choice in Hanoi. The most popular drinking places are bia hoi, which serve unpasteurised beer and traditional snacks. Most bia hoi are quite modest, and consist of a few plastic tables and stools set out on the pavement. However, as the economy has developed, more upmarket venues have opened up to cater to the new middle classes. The most notable of these are the Czech beer halls –- bia tiep — that have opened up in Hanoi and Ho Chi Minh City. 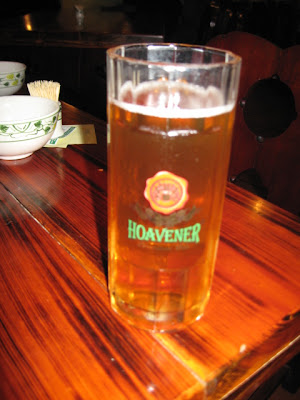 Drinking in Hoa Vien (or the half dozen other such places in Hanoi) two things are immediately obvious. The first is that the décor, food, and beer are all heavily influenced by European styles. The other is that the clientele –- unlike the bars and pubs of Hanoi’s tourist district — are almost exclusively Vietnamese.

Although modern Vietnam is a capitalist-friendly place, during the 1970s and 80s the main foreign influences were from other communist countries. Thousands of Vietnamese worked or studied abroad in the USSR or the Eastern Bloc (including Hoa Vien’s founder, who is now the honorary consul for the Czech Republic in Ho Chi Minh City). One of the more positive aspects of this cooperation is the exposure to a European beer culture that complements Vietnamese drinking habits without seeming uncomfortably foreign.

Hoa Vien mainly serves a pilsner style draft lager; the taste is light but hoppy, and well-suited to provide refreshment in Hanoi’s muggy and humid summers. A bottled version is also available, as well as a stout. There is a varied menu, with a broad range of hearty east European dishes, as well as more traditional Vietnamese food.

Bia hoi are likely to remain popular –- 3,000 dong (10 pence) for a glass of street-corner lager on a hot day is too good an offer for most people to turn down. However, for those with a bit more cash to spare, bia tiep are the perfect places to witness the fusion of Vietnamese and European cultures through a shared love of beer.