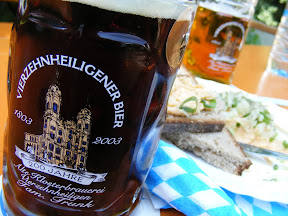 Want to get some of that Franconian village Hausbrauerei action without much of a hike? Then Brauerei Trunk is for you. Because it’s behind the monastery at Vierzehnheiligen, there are frequentish buses and short, well-signposted walking routes from Lichtenfels and Bad Staffelstein.

Being next to a tourist attraction, the Alte Klosterbrauerei (as it’s also known) is open every day, so you don’t need to worry about going all that way for nothing. Our Wanderfuerer makes some kind of snotty remark about “viele Senioren-Busreisen” (lots of old people’s bus excursions) but we thought it was quite nice to go somewhere where there were some other people.

It’s a lovely beer garden, which overlooks the Basilika. The beer’s pretty good too; we had the Dunkles-Export and the “Ernte” Bier. The latter (“harvest beer”) is made with three types of grain including rye and was very tasty, with a wonderful fruity aroma and hints of cherries in the taste. There are also snacks available. It’s all self-service, with a deposit on the glasses.

The obatzda is so dirty. Mmmmmmmmm… dirty obatzda.

Lichtenfels and Bad Staffelstein are on the main Bamberg-Coburg railway line; more trains stop at Lichtenfels. To pick up the path from Lichtenfels, turn right out of the station and keep following Bamberger Strasse until the town runs out — it takes a while, but don’t give up. There’s a MacDonald’s on the outskirts, and about here you’ll see a sign off on the left to the monastery. It’s a 30-40 minute walk in total from the station. Or you can get a bus or taxi.

Basilika Vierzehnheiligen itself is architecturally significant and built by Balthasar Neumann. If you’re into baroque tat, you’ll love it.

loving these posts. This area is one my ‘ten places i must go at all costs’ and these posts will prove a great reference point. not to mention whetting my thirst!

Thanks, Leigh. We always worry that these accounts of our holidays are terribly boring for people, so it’s nice to know you’re enjoying the current batch.

no problems – there’s some great and not so great beer blogs out there. As someone who finds beer, travel and food linked, it’s a nice change. There are plenty of beer history, beer rating and beer tasting sites out there so these posts give an interesting variety. Plus, i think the majority of people that are serious about beer are serious about travel, and all the drinking that that entails, too. Beer is a great way to get around the UK and abroad, due to it being such a diverse and exciting world. I strongly beleive that the real way to a country’s heart is through its beer and food.