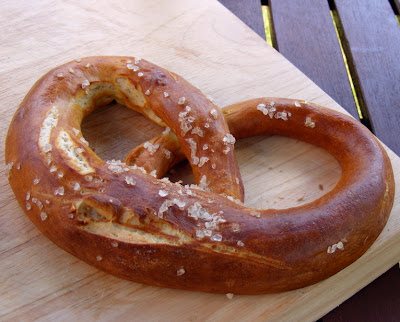 I’ve been trying to work out how to make proper German-style pretzels for a couple of years now. They’re just perfect with a pint — filling, salty and, well, German.

Today, I finally nailed it.

There are lots of recipes around and I tried most of them, but none quite seemed to do the trick. The texture was never quite right – it should be chewy on the outside and fluffy in the middle. Our recent trip to Germany only made me more determined to crack the problem — I couldn’t bear the thought of waiting until our next holiday to have another pretzel!

Boak did manage to find authentic pretzels in a German bakery on the Brompton Road and it was inspecting one of those that helped me perfect my recipe.

Almost any fluffy white dough will do. The tricks are all in the finishing. Specifically, the shape you roll the dough into before you make the famous pretzel shape; the fact that you boil it before baking; coating it with a solution of bicarbonate of soda [UPDATE: use about one level teaspoon of bicarb]; and slashing the top with a knife.

Recipe after the jump.

Mix together the flour, salt, water, milk and yeast — I did it in my Magimix with the dough hook, which took about 30 seconds.

Knead the ball of dough (which should be soft and elastic) with a little more flour and then put it in an oiled mixing bowl covered with a teatowel. Leave it to rise for about 30-40 minutes.

When it’s doubled in size, knock it back, knead it a bit more, and then put it back to rise for another 30 minutes.

Get a large pan of water boiling and put the oven on to 190 degrees centigrade.

When the dough is ready, take it out of the bowl and cut it into about six equal pieces. Cover them with a teatowel.

Take one piece and roll it out into a kind of sausage shape. Don’t flour the surface — that will stop you rolling it properly. Once you’ve got a cylinder, start rolling it so that there is a bulge in the middle, with both ends tapering out to about 1.5 centimetres in thickness. The whole thing should be around 30-40 centimetres in length.

Then take the two ends, bring them into the centre, and fix them to the bulge in the centre with a bit of water. 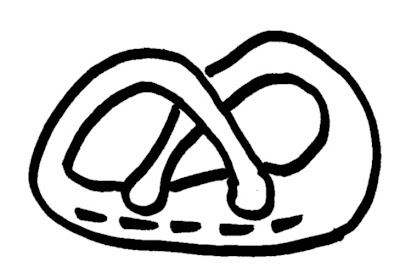 When you’ve shaped six pretzels, boil them one or two at a time, for about a minute each. When they come out of the water, put them on paper towels to dry.

Make a solution from the bicarbonate of soda and about 100 millilitres of warm water and thoroughly oil a baking sheet. Then dip each pretzel into the solution and put them on the baking tray. Sprinkle them with rock salt (or pumpkin seeds, sunflower seeds, sesame seeds — whatever you fancy).

Then, with a sharp knife, cut a line a centimetre or so deep across the thick part of the pretzel. This makes them split, and makes them look like a proper pretzel.

Then put the tray in the oven for 20-25 minutes, or until they’re dark golden brown.

When they come out of the oven, let them cool for an hour or two, which will help the outsides harden, giving that familiar chewy-but-fluffy texture that makes pretzels so satisfying.

If you try it, let me know what you think.

PS -Germanophiles going to GBBF may want to note that the K&S bakery, which specialises in German breads, cakes and has the most authentic pretzels in London, is just down the road from Earl’s Court.

17 replies on “Pretzels — the definitive recipe”

My wayback experimentations got me to boiling them in beer, or better yet, just wort.

My first assumption was that they’d been coated in malt or malt extract, but this bicarbonate of soda trick really does seem to nail the flavour. Probably couldn’t hurt to use beer for the boil, though — or maybe even add beer to the dough..?

Taste and texture are good but I put too much rock salt on surface. Will try again without rock salt, perhaps with poppy seeds or sesame seeds. Thanks for posting this recipe. The only thing you need to do is explain the proportions of the Bicarb of Soda solution. How many teaspoons per 100 millilitres of water ?

Thank you so much, been looking for a proper preztel recipe for ages!!

I tried. And failed. Followed the recipe meticulously, but still failed. You neglect to state how much bicarb is supposed to be in the coating mixture, and it ended up looking and tasting like home made pizza dough, just overdone. And can you also explain how to get the wet pretzels off paper towels without leaving bits of paper towel on the bottom or wrecking the pretzel?

Leni — sorry it didn’t work out for you. I didn’t have any trouble with the kitchen towels breaking up. Maybe try using a clean cotton tea-towel instead? I’ve added a measurement for the bicarb to the recipe — a level teaspoon is about what I use.

The Beernut linked me back to this page from my recent blog entry:

These look really good! The roll that leave a bulge in the middle is a real obvious but great idea! I hadn’t thought of that but will definetly give it a try next time. Good stuff. 🙂

Thanks for this – just made my first batch and recipe was fantastic.

Can’t quite get the uber crusty surface and dark dark brown colouring though – any tips?

Jen — glad you liked it and that the recipe worked for you. How long did you leave them in the oven for? I’m quite an impatient baker and tend to take things out too soon, and these did need quite a while to really turn dark.

Will have to try your recipe, though I have my own which is VERY good. One thing though, you got the shape wrong. You need to twist the arms together and then rest the tips on top of the bread rather than underneath.

Chris — you’re right about the shape. Funnily enough, I was making some bread (not pretzels) last night and, as I was messing around with the dough, made a couple of pretzel shapes and did it the way you describe, and it suddenly looked much more “pretzely”.

Brilliant, thank you very much for the clear instructions. They turned out just as I wanted, except they stuck to the baking paper, which was my fault because I plonked them on it still wet from the bicarbonate of soda dip. Once we’d cut them free they tasted delicious, next time I’ll use the greased baking tray as suggested!

Amy — glad it worked out. I now swear by Circulon non-stick baking sheets, by the way.

Make some of these next time I visit!

Have you tried caraway seeds?

Hey, brother. (LittleBailey is my brother, not my son, despite his poorly chosen pseudonym.)

Made pretzels last night, they were amazing, thanks a million for the recipe post. Couldn’t quite wait for them to cool before taste testing!
I’m looking forward to hosting a beer and pretzel afternoon in the sun this summer, sure to impress!
Thanks again 🙂

Wa-hey! Glad to hear they worked out for you, Talia. They’re a bit of an effort, but absolutely worth it.