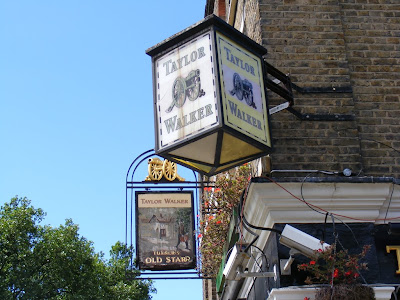 “Pub X is too poncified and it’s full of tossers.”

“Yes, but pub Y is too down-at-heel and full of smelly people.”

That’s a crude summary of a fair bit of debate on pub review sites and even some of our favourite British beer blogs.

We’ve been pondering this and have concluded that what makes a good pub is very much in the eye of the beholder: do you feel comfortable there? If so, it’s a good pub.

And we’re not talking about the quality of the soft furnishings. A pub where you can be yourself without worrying that you’re being judged — one where you aren’t the centre of attention for the wrong reasons — is what most of us seem to be after.

No-one should feel they have to go to somewhere as high-falutin’ as the Duke of Cambridge if they won’t feel relaxed because they’re wearing a football shirt; equally, if you don’t fancy drinking in the scary pub round the corner from your house, don’t force yourself.

Neither choice makes you a bad person.

Going to the pub is supposed to be fun, after all — not an ordeal.

Of course, there are some pubs which are so mixed and so welcoming that they genuinely transcend all of that. We think the The Royal Oak is one and the Pride of Spitalfields is another. Those are pubs where no one group of people rules the roost, and where everyone is so busy having conversations with each other that they don’t have time to give the stink eye to their peers.

The picture is from our trip to Wapping on Sunday. It’s of a pub, so kind of on-topic.

11 replies on “The best pub is a comfortable pub”

I like this a lot – beautifully written (as always) and totally realistic.

This is what makes you two the leading British beer bloggers!

Brent Walker is taking us back a few years.
Couldn’t agree more on enjoyable pubs, it’s horses for courses.
Re: “if you don’t fancy drinking in the scary pub round the corner from your house, don’t force yourself”. From a blogging point of view I want to force myself to go to my nearest pub. After 3 months I haven’t yet felt able to.

Please ignore the first sentence of my previous comment – I am seriously beginning to wonder if I need putting down!

It’s so nice to hear about other people’s scary pubs around the corner. The one around the corner from me advertises Sky Sports, pool, karaoke, dirt-cheap Tetley’s Smooth and free beer with your microwave meal (its nearest direct competitor is an indifferent Wetherspoons down the road), but bizarrely it also has an Aunt Sally pitch, housed in a sort of concrete-paved ‘beer garden’/car park. Local scary blokes congregate there in the summer to drink Carling, sing loudly and have fights at chucking-out time. And play Aunt Sally, of course.

I had no idea other people had scary pubs around the corner from their houses. I make a point of going into all of mine (I have lots) at least once. Just once, in most cases.

Nothing like an enormous bloke coming to your table and asking if you want to buy An Phoblacht to make one feel welcome and comfortable.

Having said that, two of the scary pubs near us have recently refurbed and started boasting about real ales. Maybe we should check them out. After the Forchheim experience, I reckon a round in each would be a walk in the park…

Shock news about London, just in: “gentrification” improves more pubs than it closes.

I have a truly scary pub directly across the road from me and I have never gone in because nightly I am serenaded with drunken brawling which seems to stumble from the premises, across the street to my building. And most recently the pub has instituted a very amplified karaoke night which drowns out anything I might be listening to in my own flat and has become my own little aural hell.

I get a bit misty eyed when I see other pubs with the “Please respect our neighbors and leave quitely” signs which I’m pretty sure this pub doesn’t have.