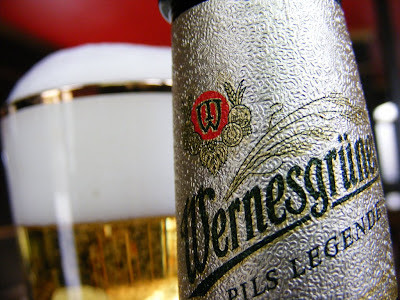 3 replies on “The bitterest Pils is (not) hard to swallow”

I was a big fan of some East German beers, but never Wernesgrüner. Give me a Muhlhausen Pilsator any day. Though unfortunately that’s not possible, as the brewery closed almost two decades ago,

I’ve been drinking Wernesgrüner for years though not had any since Christmas.

Funnily enough I gave a friend a lift to the airport this morning. I was given a six pack of it by way of thanks. A very decent beer as you say.

I picked up a six pack of this from Aldi not realising what I was buying. I thought it would be a run of the mill pils like some of the other German beer they stock, but was very pleasantly surprised with how tasty it was. Dirt cheap too.