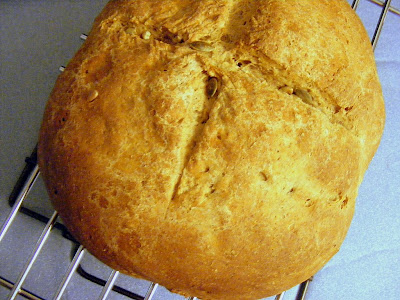 I stumbled across this beer recipe when I was looking to replicate some of the lighter German rye breads we’d eaten on holiday. It’s now my favourite bread recipe. Even if it wasn’t handy for using surplus beer, it’s really easy, and makes fluffy yet strong tasting bread. I’m not a talented baker – I have a tendency to end up with bricks, but this one works for me every time, and it also stays fresh for at least three days.

The original recipe can be found here. It’s pretty simple, and you’ll get great results first time. However, having made it a few times now, I’d make the following notes / amendments.

The various comments on the recipe describe different beers used. I think you want to use a brown(ish) ale, but it doesn’t need to be a good one. I’ve had great results with a tin of John Smiths, a tired bottle of Spitfire, and also with one of our drinkable-but-dull homebrews. I don’t think it would work so well with lager. Stout would probably be great, but I rarely have any stout in the stash that I don’t want to drink.

2. Changes and substitutions for other ingredients

I’ve found that you need to add a bit more flour for the main bit of the bread than the recipe suggests – around 480g as opposed to 410g. Also, you can substitute some of the white flour with a bit more rye, or wholemeal, if that’s your thing. Up to a 100g substituted still makes a very fluffy bread. The dough is also pretty sticky, so make sure you have plenty of flour to keep the surfaces and your hands dough free.

20g of salt seems excessive – 10g is fine. Butter substitutes for shortening, whatever that is.

Finally, seeds work well in this – add around 20g of sunflower or pumpkin seeds after you’ve knocked the bread back.

It’s always a pain when a recipe calls for overnight prep – it usually means you need to be organised for two days. Fortunately, this recipe is very forgiving; a five hour prep is fine. Equally, on a couple of occasions I’ve forgotten about the bread and left the rye and beer mix to mature for over 48 hours. It’s still fine.

The overnight prep is actually pretty good from the perspective of using up crap beer though – if you’ve just opened a beer, and a few sips has convinced you that you don’t want to drink it, you’ll probably have enough left (355ml) for the recipe. Just bung some flour and yeast in, and leave…

The risings given in the recipe seem a bit optimistic, although that could be because I’m using old yeast. I’ve needed from 3-4 hours for the first rise, and around 2 hours to raise the loaves once you’ve knocked them back. This can be a bit difficult to fit into an evening, so there’s nothing wrong with letting it rise slowly overnight, or doing two rises.

With a fan assisted oven, you only need to cook it for about 20 minutes at 180degC. And don’t forget to slash the loaf before you put it in the oven!

The original recipe suggests this makes two loaves, but if you’re using a standard oblong loaf tin, the recipe will make one loaf and 2-3 rolls. I would use an oblong tin in future as it looks neater and prettier – the picture above is of a free-form version, which tends to expand sideways rather than upwards…

An interesting application for beer rye-bread would be to then turn around and make kvas from it. Thus you could turn bad beer into good beer. 🙂

Shortening is a semi-solid fat like lard or crisco. I think it’s called something like cookeen in the UK.

I’ve not made beer bread although I do plan doing so. I would have thought though, that much in the same way that the quality of wine used in a dish makes the end dish taste better (i.e don’t put plonk in your Coq au vin) then you should use good beer in beer bread?

I’ll use something decent that I would happily drink, and post my results. Should be interesting.

Have you ever used a good beer yourselves?

Not yet — it’s been manky beer all the way, but the bread tastes great all the same.

Let us know how you get on!

Oooh this looks great. The oven in my flat is pretty dodgy but I want to try this! Thanks for posting it.

[…] Finally, we had to try T.E.A. again. I would love to say that the conversion process was complete, but it still didn’t work for us. But it made wonderful beer-rye bread. […]