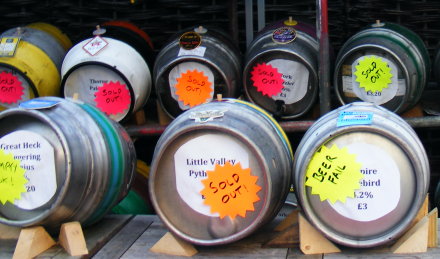 On the same day we visited the Dove, we also made it to another legendary west London pub, the  Bricklayers in Putney. It’s beautifully done out, being neither trendy nor grotty, although it was bloody cold.

It was the week after their beer festival and the garden was full of spent casks — “Beer Fail!” Nothing was going to waste, though and anything left in the garden was going at a pound a pint.

We were excited to see a huge range of Timothy Taylor’s beers and didn’t even bother trying anything from the guest pumps or the garden. We’ve heard a lot about the legendary Dark Mild, and it is indeed fabulous: chocolate and vanilla and at only 3.5%. Ram Tam is a wonderfully fruity dark beer, also very special, with blackcurrant and clove notes. Why aren’t Tim Taylor’s other beers as well known as Landlord?