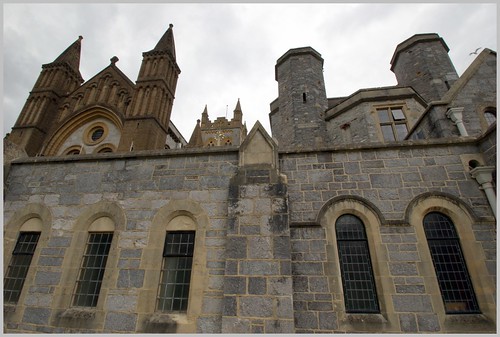 Perhaps if Henry VIII had left them alone, Britain’s monastic communities would be big players in brewing today. As it is, Buckfast Abbey in Devon is as close as we get.

The monks of Buckfast don’t make beer, though: as perhaps befits the French origins of the monks who took over the Abbey in the nineteenth century, they produce fortified ‘tonic’ wine. What’s more, Buckfast wine does not have a good reputation. The first time we heard of it was in an episode of Rab C. Nesbitt.

Watching the oddly stilted video presentation in the visitor centre, we were struck by several things: the contrast between the simple monastic life and the huge, branded tankers transporting wine “all around the world” (Scotland); the glasses of beer visible on the table during footage of the monks at lunch; and the shot of the monastic produce shop.

Yes, there is beer at Buckfast after all — bottles of Chimay and Andechs on sale to tourists, alongside honey, sweets, soap and trinkets made by monks all over Europe.

The Abbey is weird but worth a visit, especially as it’s near the Valiant Soldier. Entry is free and it’s open every day, all year round. Pic from Flickr Creative Commons.

Ampleforth Abbey are now selling an abbey ale which is brewed under licence by Little Valley, but they have been making their excellent cider themselves for a few years now:

I come from a major centre of Buckfast consumption so couldn’t resist pulling off the M5 last summer to visit the Abbey, and take pictures of the “Our Lady of Buckfast” statue to give everyone at home a giggle.

The base wine for Buckfast is Italian, fact fans.

Devon Earth brewery have brewed at the Abbey and I think will be recommending soon there.

I called in at the abbey to pick up a bottle of bucky when I was passing, shame I didn’t know about the Valiant Soldier.

It’s curious that there seems remarkably little evidence – almost none, in fact – of redundant monastic brewers going into business as public brewers, or former monastic breweries becoming public breweries. The Blue Anchor in Helston, of course, claims to be a former “monk’s rest home” (whatever one of those was, and on what evidence I know not), but other claimed links between monasteries and later breweries, eg the Mortlake brewery, and the former Morgan’s brewery in Norwich, are either unproven/unprovable or untrue.

We get asked if we stock Buckfast Wine sometimes . Always by a scot with a mischevious grin.