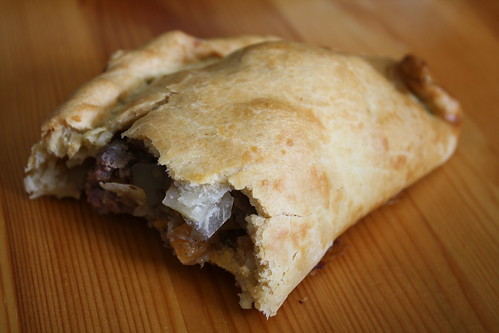 We’re not pasty experts, but it seems to us that there are some interesting parallels with the world of beer, and some lessons to be learned.

1. It’s possible to be particular without being a snob

Most people we’ve spoken to in Cornwall have a favourite pasty maker and often a least favourite, too. They can talk for ages about the pastry, the meat content, the seasoning, and so on. But most pasties cost about the same, and people’s preferences seem to be based entirely on their experience of eating them, rather than branding or cultural prejudice. A working man is just as likely to buy a pasty from an independent trader as a chain and, despite the general sense of connoisseurism, the pasty remains an everyday foodstuff. (Point: snobbery isn’t always the word you’re looking for when it comes to people who are picky about beer.)

2. Doing it yourself makes you a more savvy consumer

People don’t only buy pasties, they also make them. We get given recipes by shopkeepers, butchers, neighbours and people we meet on the bus: everyone has one, they’re all different, and they are all (supposedly) absolutely definitive. When they do buy a pasty, it is with an intimate knowledge of the product. (Point: more people should try brewing, at least once.)

3. The big companies can’t cut it in this environment

Though ubiquitous elsewhere, Greggs does not exist in Cornwall. Its pasties cannot compete with those from the local chains and independent bakers on either price or quality, so they’ve stayed away. (Point: when you can only get beer from Burton and Suffolk in pubs in Exeter, something has gone a bit wrong.)

4. The best pasties do not have the most expensive ingredients

People do try to posh up pasties by, for example, using more beef, from more expensive cuts. It doesn’t work. A small amount of a cheap cut — chuck steak, usually — seasoned well, cooked with care, is perfect. It’s the premium sausage problem again. (Point: this again, maybe — we’d like to hear brewers boasting about what they’ve achieved with basic ingredients.)

2 replies on “Pasties: a Study in Craft”

Me too and I’ve just had my brekkie.