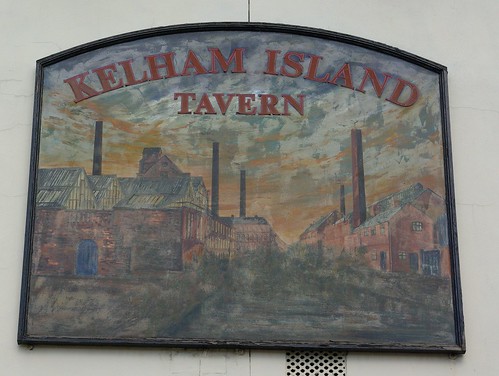 Hay-on-Wye is a small market town on the border between England and Wales famous for its thirty or so bookshops. Since the 1970s, those bookshops, and then the literary events they’ve attracted, have helped Hay prosper. Without them, it would receive a fraction of its current number of visitors.

We don’t think there’s quite an equivalent ‘beer town UK’, but Sheffield springs to mind as a possible contender.

It has more than its fair share of great pubs and breweries: we’ve found that, there more than any other UK city we’ve visited, an ordinary looking pub chosen at without prior research will turn out to be selling something we can get excited about.

Has anyone measured the impact on beer tourism on Sheffield’s economy? Has the City Council considered actively promoting Sheffield as a destination for beer lovers?

With a little work, it could it be Britain’s Beervana. As it is, anyone visiting the UK looking for good beer should certainly aim to spend a day or two there.

Let us know if there are other candidates we’ve missed. Burton, perhaps, has a greater entitlement.

There are quite a few places that could fit the bill. Sheffield is a good contender (but as someone who has visited the city regularly for many years now trust me when I say there are plenty of pubs there selling stuff you certainly wouldn’t get excited about – although I guess that depends on your excitement threshold). But as you suggest, what is notable about Sheffield is the number of places that not only sell cask beer when you wouldn’t expect them to, but also sell seriously good cask beer as well (Abbeydale Brewery beers seem to be everywhere).

Elsewhere York is a serious contender. Huddersfield has its fans (and some seriously good pubs), as do Derby and Nottingham. Merseyside CAMRA like to dub Liverpool the “Real Ale Pubs Capital of Britain” and although I don’t know what that is actually supposed to mean, the City Centre is very well blessed with lots of good pubs. Rather closer to home to you two, I have always been impressed by what Bristol has to offer on the (admittedly few) occasions I have been there.

Beer’s impact on Sheffield is nothing like as dramatic as bookshops’ impact on Hay. if the pubs were crap, Sheffield would still thrive.

I’m not aware of any concerted effort by the council to market the city as a beer destination. Whereas Derby do:

I live in Derby but spend more of my drinking time in Sheffield. Draw your own conclusions…

That;s funny in some ways – I live in Sheffield, and cost considerations restrict my Derby visits, but if I was to recommend a nearby metropolis to any Sheffield folk seeking a destination with a huge range of pubs, Derby would be it.

I can’t count the number of times I have had great beer in Derby at the end of a Derbyshire day out. Importantly, Mr Johnson’s Hay books/Sheffield pubs comparison probably rings true for Derby as well (I haven’t followed your link yet though!). The difference would appear to be Sheffield council’s lamentable dearth of interest in any of their heritage buildings or pubs.

The grass is always greener, eh?

Bristol is coming up fast and it’s also got its cider heritage, which is a nice add-on if you’re a fan of the filthy stuff.

and about time too!

Surely the Hay-on-Wye of beer would be a relatively insignificant place that was “put on the map” by attracting people from far and wide for its beer and pubs. In the old days, Kinver near Stourbridge was noted for the unusually wide range of beers available in the village.

I’ve not much time, so can’t go into massive detail but in size-of-beer-tourism-vs-size-of-town-and-consequently-of-serious-note award likely goes to Norwich.

I submit this material in support:

I love Norwich. The pubs are splendid and do really attract a lot of people. The Fat Cat empire continues to grow – on their third pub I believe. Great beer, too.

But Norwich is a fairly big city in its own right, and sufficiently remote from other centres of population that it’s unlikely to generate much “beer tourism” in the way that Sheffield does.

Norwich is magnificent for real ale, and I’d love to do the city of ale thing there. The Norwich beer festival is already a firm favourite of mine.

I do think Sheffield is the best place I’ve been for real ale (not to mention the quality stuff on keg & bottle that you also get in most real ale pubs round here). We already get quite a bit of beer tourism in Kelham Island, and it’s worth pointing out that you are more likely to come across beertickers in that area of Sheffield then anywhere else in the UK

However, I have little to no confidence in Sheffield Council’s ability to run a bathtub, let alone a tourist campaign aimed at real ale enthusiasts.

As such I’m happy to let the local CAMRA branch do the lions share of the promotional work, and maybe bang the drum for the number 43 bus pub crawl from Chesterfield to Dronfield to Sheffield, which is starting to look like some very nice competition for Kelham Island.

I agree with jesusjohn – Norwich is definitely brilliant for beer. It’s a small place so even the out of town gems are walkable, and Norfolk has some excellent breweries. Adrian Tierney-Jones does a good write up here.

I tell you what is a shame – that Bakewell doesn’t gun for the beer tourist pound. Chatsworth House’s Peak Ales brewery makes excellent old fashioned brews and Thornbridge is right there. Sad there’s no coherent offer for the brewery and the pubs. Very difficult to find any Thornbridge beer in its home town!

Sheffield does the business, of course, and Manchester is fabulous for beer. I agree Norwich already has a tourist trade – perhaps that’s why they’ve been effective at marketing their excellent pub offer.

This leads on to a separate debate about overlooked beer towns. I humbly suggest Cambridge. A city of 100k residents with 10-11 GBG entries and plenty of other good choices. Given its class, I’m pretty surprised the Cambridge Blue doesn’t have the national beer geek recognition of, say, the Fat Cat or Kelham Island Tavern.

Cambridge is a great beer town, used to live there and amazed that the boozers I used to frequent (usually in search of lager) are still going — have fond memories of us CCAT lads (now the Ruskin whatever) getting into the Free Press snug on Fridday nights before the rowing lads from uni.

Looking not to far from Bakewell, Chesterfield is very good for beer. A number of good pubs, 2 outstanding real ale off-licences and quite a few breweries.

Just a shame that Chesterfield is very much in Sheffield’s beery shadow.

I think Bray is probably the Hay-on-Wye of food but I don’t know if there is one for beer… it’d need to be some place you go to only for the beer choices, and go there for some kind of lore, so maybe it is Burton-on-Trent, it’s just an obscure, twisted, taken-over-by-monolythic-MC- version of Hay-on-Wye…

Thanks for comments, everyone.

As various people have suggested, the point is that Hay-on-Wye *only* survives because of bookshops, so Sheffield, Norwich, Manchester, etc.., aren’t quite right.

Bakewell is a good call.

Somewhere like Haworth, with a bit more variety (not quite so much Tim Taylor) and a couple more good pubs might fit the bill.It already has a heritage railway with beer onboard.

I had never considered a council’s role in promoting the beer in a city until I read Tandleman’s review of (a) Belgian beer festival where the town council is so keen to promote the festival that its free to get into the municipal venue.

If towns and City’s were to take on the role of advertising and promoting beer tourism, Sheffield, alas, would be utterly crap at it. So much so that I’m off to Ripley!(irrespective of advertising)…