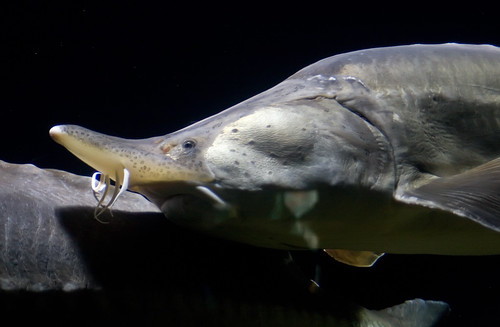 There was a bit of a to-do the other week when a UK TV show about food production suggested that isinglass finings represented some kind of ‘dark side’ of the brewing industry. (We didn’t see it — we gathered this from the miniature Twitter storm that ensued.) Isinglass is made from the swim bladders of fish, so we’ll acknowledge that there is a certain ‘ick’ factor, but it’s been used in British brewing for a long time and isn’t something we have any problem with at all.

This 1978 article from CAMRA’s What’s Brewing, however, suggests that not only is isinglass harmless, but that brewers could be going a little further and making it part of their ‘craft’ schtick:

On the first floor of Godson’s Brewery… head brewer Rob Adams takes what looks like a large flat sea shell from a sideboard drawer… It is the dried bladder of a sturgeon fish… Mr Adams makes his own finings from sturgeon bladders, bought at £7 a pound and mixed with water in a large plastic dustbin.

Do any brewers these days make their own isinglass from scratch? And would a really ‘crafty’ brewery perhaps go a step further and have a saltwater pond full of fish in the back yard…?

Ian Mackey, author of this very useful book, has very kindly provided us with a treasure trove of useful clippings from this period, so expect a few more nuggets in weeks to come.

Picture by David Torcivia, from Flickr, under a Creative Commons License.

How about craft fish food 🙂

It is a very traditional practise in Britain of course, but pure isinglass is rarely used these days. The finings which are often used by, mainly, cask ale brewers, have other substances, such as preservatives, added, so it is adding chemicals to the beer. It therefore wouldn’t be seen as good practise in Germany, for example.
But a “dark side” – no, I don’t think so, but it should be made plain on the packaging that a given beer has been fined in this way, so that veggies can avoid it if they so wish.

Well, German (industrial) brewers use PVPP (). This supposedly does not violate the Reinheitsgebot as it is filtered out completely — but the practice demonstrates how meaningless said purity law is as an indicator of ‘craft’ or even quality. I wish Ron Pattinson were (much) more widely read here in Germany!

Isn’t isinglass only used with cask beers anyway, as brewery-conditioned beers will be filtered and so don’t need it?

As Dom from Thornbridge reminded us recently, isinglass can also help with head retention; also, quite a few ‘craft keg’ beers aren’t filtered.

And, as you know, we tend to think of most cask beers as ‘craft’…

Is this about killing fish? Haven’t we—and when I say we, I mean all of mankind—been doing that for 250,000 years?

Marble went vegan years ago & tried to make a selling-point of the beer being cloudy for a while. Then they found some animal-friendly way to fine the beer (didn’t brewers use to do it with eggshells?) and out went Cloudy Marble and Chorlton-Cum-Hazy.

Apologies for coming late to this blog entry.

Believe it or not, for a short period there was a risk that any beer brewed using isinglass would have to be labelled ‘contains fish’ as the EU was updating legislation on allergens in foodstuffs. As some people have an allergy to fish it was considered necessary, despite the fact that it would to all intents and purposes be absent from the final beer. Fortunately they saw sense in the end, albeit not without considerable haranguing.

On another point, the EU also tried to ban Light Ale as they thought it referred to the calorific content rather than the colour and taste.