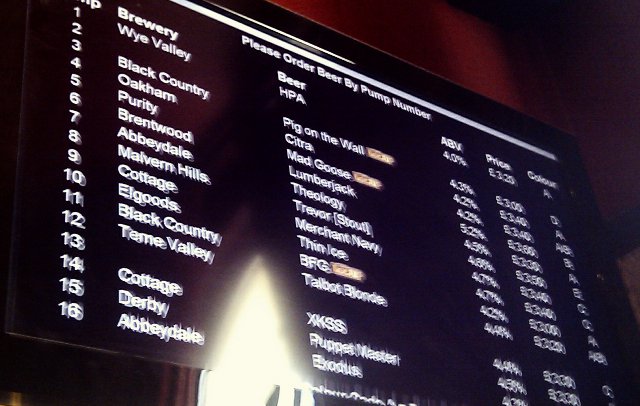 When the train from Penzance spat us out in Birmingham on Friday, on the way to Warwickshire for a wedding, we found we had time for a pint or two between trains. Is there anything sweeter than an hour in the pub stolen from a day which is otherwise not your own? (Would ‘more bitter’ be appropriate?)

The Post Office Vaults is a windowless basement pub a short walk from the back entrance of Birmingham New Street Station. It smells, as cellar bars often do, a little earthy, but those first pints of pale’n’hoppy ale (Salopian Oracle (4%) and Ossett Citra (4.2%)) were just what we needed to revive us. The Hobson’s Mild (3.2%) with which we followed those tasted a bit… mild. Too much crystal malt was in evidence for our taste, but there was no doubt it was in excellent condition. The finisher, a bottle of Stone IPA, was anything but mild, though its taste didn’t quite live up to its in-your-face, marmalade perfume.

On the return leg, we arranged a slightly longer pause between trains, and managed to dash to the Wellington, an old-school ‘beer exhibition’ with fifteen cask ales on offer. Mid-refurbishment, it felt tatty, but not unpleasantly so, and the real-time beer list on a flat-screen was a distinctly modern touch. At one point, we watched the landlord pull a tot of golden ale into a half pint glass and hold it up to the window, turning it on his fingertips and peering with narrowed eyes, like a diamond dealer inspecting a stone for flaws. We were in the hands of professionals.

The star of the show at the Wellington was Oakham Citra (4.2%), though we couldn’t have managed a long session on it, and if we’d have been staying for the afternoon, we’d have stuck with Abbeydale’s Exodus (4.3%) — also very pale, also ‘floral’, but more balanced, and without any tooth-jangling astringency. Abbeydale seem very reliable to us and we wonder why they’re not better known; their understated (homemade-looking) graphic design can’t help.

Finally, we fit in a brief stop at a largely deserted Brewdog Birmingham. Cocoa Psycho (10%), a chocolate stout, had a big hole where some flavours should have been. The same was true of a fairly bland IPA hopped only with Goldings from Kent (6.7%). Neither was ‘fizzy’ or ‘cold’ — just lacking depth. The same IPA with Slovenian Dana hops, however, was a startling, freakish eye-opener that made us laugh. Our immediate thought: roast lamb! On dissecting that, we decided we were tasting something like thyme, mint and ‘onion flowers‘. We’re not sure we liked it, but our taste-buds appreciated the wake-up call. Someone should go all out and use Dana in a Rauchbier, or even a meat stout.

The local CAMRA branch seems to be pretty clued-up and active. Their magazine is a slick publication which, in the current issue, includes a nice article on Antwerp, as well as sneer-free news of Brewdog’s opening. Their free ‘real ale map’ of the city is excellent, too. Brewdog’s staff, for their part, were doing an excellent job of educating interested punters without patronising them.

5 thoughts on “Brief Encounter With Beer”