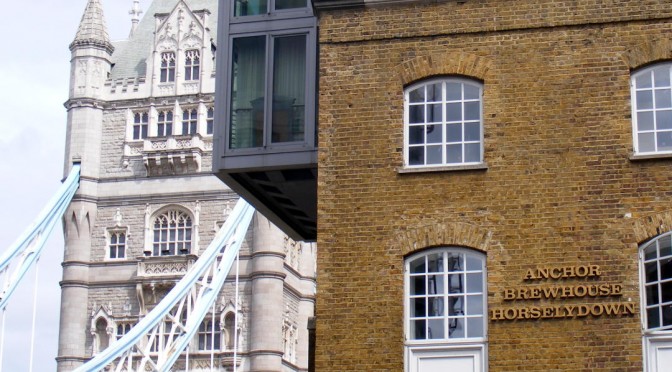 As luck would have it, quite a few key sites in the story of ‘the strange rebirth of British beer’ happen to be clustered together in the Southwark area of London, making for a perfect history walk with added boozing.

UPDATE 20/09/2014: It hadn’t occured to us back in December last year, but undertaking this crawl while reading Brew Britannia would be a good way to spend an afternoon. We’ve added notes on which chapters in the book reference which pubs.

The walking route we have suggested below will take you past the following locations:

1. Ye Olde Watling — City of London headquarters of the Society for the Preservation of Beers from the Wood, now a cosy Nicholson’s chain pub. (Chapter 1)

2. The Rake — the first really notable ‘craft beer’ bar in London, and still a great place to find good, or at least interesting, beer. (Chapter 12)

3. Becky’s Dive Bar — perhaps the first really famous ‘beer exhibition’; now one of two pubs calling themselves the Wheatsheaf, in the basement of the old Hop Exchange building. (Beer pretty rotten on our last visit.) (Chapter 5)

4. The Goose & Firkin — the first of David Bruce’s Firkin pubs which opened in 1979, now a Shepherd Neame pub called the Duke of York. (Chapter 7)

5. The Royal Oak — a great pub selling beer from Harvey’s of Lewes, and a good opportunity to understand the conservative approach of family/regional brewers which weathered post-war takeover mania. (Chapter 2; and especially the Epilogue!)

6. The Anchor Brewhouse — next to Tower Bridge, this is the site of the first Courage brewery which opened in 1787. Ceased brewing in the nineteen-eighties. A relic of the Big Six era in the heart of London.

8. The Draft House — a good place to conclude this walk: one of the many new generation ‘craft beer’ focused pubs which followed in the wake of the Rake. We’ve never been, but we hear the beer is good. (UPDATE: see comments below — some people don’t rate the Draft House and suggest similar, better pubs nearby.)

OPTIONAL: we’ve also marked on the map The Hole in the Wall at Waterloo (an early cult CAMRA pub); the historic George Inn; the location of the Kernel Brewery (added in an update); and the site of the Barclay Perkins brewery on Park Street.

Note: we’ve never had any trouble in Southwark, but, as ever, be aware of your surroundings when walking in parts of London you don’t know, especially after dark.

UPDATE 04/07/2014: see also our failed attempt at the Bermondsey Beer Mile which led us on a crawl of pubs around Tower Bridge.