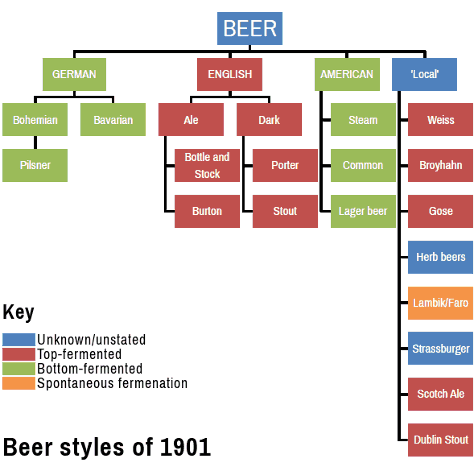 The diagram above is a representation of text from a 1901 book called One Hundred Years of Brewing publish by H.S. Rich & Co. of Chicago as a special supplement of The Western Brewer.

The passage in question is most interesting as a reflection of how things looked at the time — which types of beer had people heard of? And how were the relationships between them perceived?

It is quoted almost in full below, with our own emphases, but you can (and should) take a look at the original here:

There is one typical, strongly pronounced distinction to-day, and… between the beers of Germany, England and America. The German beer… is expected to be made of a more dextrinous wort, rich in extract, of full-mouthed taste, moderate in alcohol, mostly of dark colour, and possessing a rich and permanent head of foam.

The Bohemian beers have more of a vinous character and possess a fine and strongly noticeable hop flavor, a pronounced bitter taste, and are light in color.

The English beers are divided into two classes, the light colored beers — ales — the dark or black colored ones — porter and stout.

The ales have chiefly a vinous character and possess a good percentage of alcohol and extract, strongly marked hop flavor and bitter taste, and are rich in carbonic acid. The bottle ales and stock ales, especially the last named ones, possess a characteristic fine wine taste, produced by a peculiar and prolonged secondary fermentation. Porter, with a rich and very heavy foam, was in former years a very heavy beverage, but at present is brewed in [sic] lighter, and has, as a result of its composition, a characteristic bitter and dry taste.

The American lager beers taste more like wine than the German ones and in character are nearer related to the Bohemian or Austrian beers, have very much effervescence, and combine the quality of preserving the foam with a more or less full-mouthed taste. Their color, with the exception of special brands, is light throughout.

Besides these there are a number of provincial or local character… To count up their names only would fill several pages, and for that reason we can only mention the principal ones

The weiss beer (wheat beer originally) are strongly effervescent beers, produced by top fermentation and going through the second part of fermentation after being bottled…

“Broyhahn,” also a historical beer, is a very light colored, winey beverage, of a sweetish-sour taste. “Gose” is a beverage similar to “Broyhahn”. Both are made by top-fermentation.

Too numerous to mention individually are the herb beers, receiving their flavor by the addition of herbs of the greatest variety…

Among the celebrated Austrian beers, the already mentioned “Pilsner” stands at the head of the list. They all have a similar winey taste, and are of light color.

Among the English beers, Burton ale takes the lead… Side by side with the same we find as type of the dark colored beer Dublin stout. Scotch ale was at one time a very celebrated beverage, its vividness and fine winey taste being especially praised.

In Belgium there are to be found certain beers of local celebrity possessing all the qualities produced by the process of self fermentation to which they are subjected, their names being “Lambik” and “Faro”.

One of the most celebrated beers in its day was “Strassburger,” which, for a long number of years, controlled the Paris market to the exclusion of the Bavarian beer. It has a characteristically winey taste…

The American breweries produce, besides lager beer, ale and porter, the so-called “common” beer and “steam” beer, the last named on the Pacific coast.

That’s not very far off the style framework put forward by Michael ‘Beer Hunter’ Jackson’s in his World Guide to Beer 77 years later, is it?

But what does ‘winey’ mean in this context?