Prompted by Andy Mogg at Beer Reviews, here are our nominations for the best bevvies, bars, book and blogs in the world of beer in 2014.

Bearing in mind that we live a long way from where the action is and haven’t been abroad, our choices are perhaps a bit parochial and conservative. In general, though we try to keep a bit of distance and remain objective, you might also want to cross-reference this lot against our disclosure page. And who knows how this list might have looked if we’d written it yesterday, or tomorrow.

After much over-thinking, we decided that we wanted to recognise a beer from one of our local breweries, of which we have drunk several pints every week, usually at the Yacht Inn in Penzance, and which consistently delighted us — that is, made us say ‘Ooh!’ and ‘Ah!’ The peachy, pithy, juicy aroma gets us every time, laid over a clean, fresh-tasting beer with no rough-edges at all. Through compromise rather than design, it’s been an American-style IPA at session strength for some years, which is now apparently all the rage. We expect to drink lots more of it in 2015. 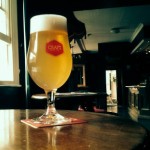 At first, we struggled to think of any keg beers we’d drunk often enough to form a strong opinion — we dabbled with a lot of one-off glasses in Manchester, Leeds, Sheffield, Bristol and London, but didn’t go back for seconds of many or any. Then we recalled this beer which we enjoyed back in June and liked enough to seek out for a second session. A gimmicky beer from a brewery whose beers we don’t find universally brilliant, it nonetheless knocked us for six — the beer equivalent of a classic ‘fruit cup’. (We have also found it good in bottles, but not as good as from the keg.) 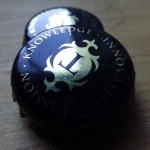 The most convincing Kölsch you’ll taste outside Cologne and, debates over style and stylistic sub-divisions aside, one of the best lager beers around. The most impressive thing about it is the malt character — solid enough to chew on. Not flashy but classy, and a real demonstration of brewing skill. (Here’s what we said back in February.)

Because it’s the best beer of all time, full stop. 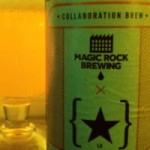 This fascinatingly complex saison-IPA hybrid was a contender for overall beer of the year based on the sheer giggling joy it prompted when we tasted it at the Sheffield Tap back in May. Even though subsequent bottles (we bought quite a few) were less exciting for some reason, it’s a beer we think everyone should try, and goes some way to proving that collaborations aren’t just opportunities for brewers to muck about with their mates and can produce really great results. (Here’s what we said in May.)

We could have chosen almost any of the beers above but decided to go for something unique to this year. It’s the Duvel we know and love but with a bit more oomph from a seasoning of fruity US hops and a touch more alcohol by volume. Ludicrously drinkable for a beer of 9.5%, it shows that ‘balance’ doesn’t have to be an excuse for meek, weak beers.

Because we never hesitate to buy their beers on sight and always find them interesting, at the very least; and because, for all the experiments and the hip branding and the leotard-related-antics, they take the matter of making quality beer seriously, it’s Magic Rock.

Pub/Bar of the Year: Star Inn

It’s a proper pub that also has great beer brewed on site at less than £3 a pint, and it’s a 10 minute bus-ride from our house. An easy choice, really.

We enjoyed the wide range of carefully chosen beers from cask, bottle and keg; an entire bar of historical recreations; a mixed crowd; Ron Pattinson talking about Brettanomyces; and a relaxed atmosphere. Good stuff.

(But it’s also the only festival we went to this year, because we were speaking at it, and they gave us free beer, so this nomination might not mean all that much…)

Supermarket of the Year: Waitrose

OK, OK, we give in — Waitrose does have the best selection of beer on the high street. Our nearest is still in the next county over, but there’s no denying the child-in-a-sweet-shop thrill of seeing those shelves groaning with goodies, and at fairly reasonable prices, too.

It’s our nearest specialist bottle shop and is way better than something so far from a major city has any need to be. We never fail to find something interesting and, though it can seem a touch pricey, there is a discount for CAMRA members which take the sting out.

This was a tough decision because we use Beer Merchants more often — the website is better and it has a better choice of Belgian and German beers. This year, however, Beer Ritz wins on the basis of the selection of British beers available, and the speed and quality of service. 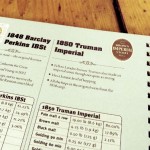 Ron Pattinson’s ring-bound book distils years of rambling, pondering and raging on his blog into a single readable volume — a crash course in beer history for the TL;DR crowd. The recipes are inspiring and educational, too, of course, but you don’t need to be a home brewer to get something out of it.

OK, this is getting embarrassing, but the fact is, we think Lars Marius Garshol’s work exploring indigenous brewing traditions in Norway, the Baltic and beyond is really important. It doesn’t hurt that he also writes well, highlighting characters and stories, and deftly evoking remote and interesting places. (For the short list, see our Golden Posts.) 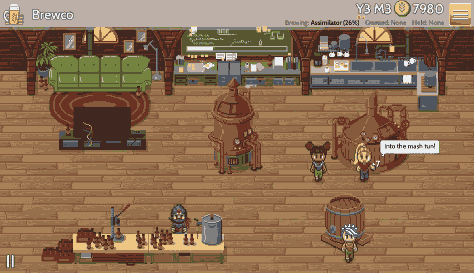 Let’s be honest — the only apps we really use to help with beer geeking are Twitter and Google Keep. This game, though, became an obsession for a few weeks at the start of the year.

He’s funny, shares interesting stuff, and he’s got good manners, e.g. he Tweets links to his blog posts once, not 12 times throughout the day. If we’ve got a question about Twitter etiquette, he’s the bloke we ask. (For a longer list of good beer Tweeters see this post from last week. For the reeeally long list, see everyone we follow.)

We’ve really enjoyed Rob Lovatt’s blog posts revealing the thinking behind particular beers and business decisions: this one about canned beer is an all-time classic. A background note of righteous spikiness only adds to the fun.

Awww, thank you! I will treasure my Johnson for always.

It is always a talking point when people notice your Johnson on the mantelpiece.

The best Golden Pints list I’ve read so far, probably because I’ve had all the beers, I went to BCubed and I drop in to Waitrose every Friday on the way home from work, so there’s not much to disagree with here!

Oh, and I also like the Beer Nut blog. He’s a very engaging writer.

And I downloaded Fiz last week. Stupid game. I drained the battery on two phones on the first day.

Thank you so much, guys. This is very welcome. 🙂

Good to see Proper Job getting the recognition it deserves, it’s a shame St Austell seem to put most of their marketing expertise behind Tribute.
One thing that has always slightly troubled me; why is the character on the PJ pump clip wielding a Union Jack instead of St Piran’s flag? Is this a prelude to the marketing of PJ outside its heartland?
I did spot it a few months ago in the Bridge Street Ale House, Newcastle under Lyme, a recently opened and very enterprising micropub.

Beer geeks take it for granted but for a lot of people, PJ is crazily bitter and perfumed. It’s surprising, in a sense, that Tribute is as widely accepted as it is, being quite dominated by US hops.

Not that we’re experts on Cornish culture but we’ve found people quite happy to be thought British, as long as you don’t call them English. PJ’s use of the Union Jack is probably mostly there as a nod to the imperial origins of the beer style, though

Only 8 hours? You got off lightly…