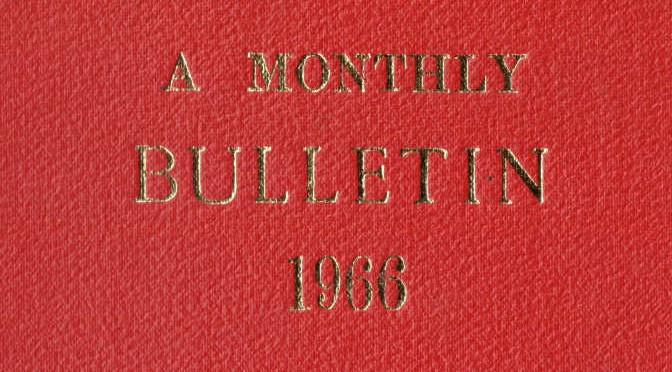 In July 1966, an anonymous editorial in A Monthly Bulletin explained how breweries of the time carried out market research into beer.

AMB was a Reader’s Digest style magazine focusing on beer and pubs and was published by the Brewers’ Society. About 18 months ago, Martyn Cornell sent us his spare volumes (he retains a full set) and we’ve been going through them with a fine tooth comb lately while researching a Big Project which is how we came across this article:

If you are market-researching in beer, you cannot merely send your team out for the day to knock on every other door in a suburban street. For one thing the men, who are probably your main customers, will be out at work: for another, they will not appreciate your representatives calling while they are out to ply their wives with drink.

The author explains that market research begins with sales statistics and surveys distributed to ‘bartenders’ (those who think that word is a recent Americanism, take note) and customers, before moving on to taste tests:

In the early days of market research in beer, tasting tests were conducted rather tentatively. Perhaps at heart the researchers wondered whether, deprived of the guidance of labels, consumers might not be foxed by any two beers of the same colour. In fact, it has been found that consumers’ discrimination is good provided only that they are kept to the kind of beer — mild, bitter, or whatever — to which they are most accustomed.

Not evidence of the existence of beer geeks, as such, but worth noting as an antidote to the idea that drinkers of the past were completely devoid of discernment.

Tasting tests were apparently carried out within breweries and sometimes in other workplaces:

You can, also, ask industrial firms if they will let you appear at their works canteens at lunch-time with a few barrels of beer to try on their employees… It will probably be difficult to arrange tests in work canteens, but where you can you will achieve a more representative sample than you can in pubs alone.

But, as you might expect, most taste-testing did actually take place in pubs, not only for ease of access but also because beer could be served in something like normal conditions. Pub customers, for all they were unrepresentative, also had other advantages as test subjects:

For the purposes of market research, some beer-drinkers are more equal than others. And it is necessary to distinguish in the records between tests conducted among casual customers and among regulars. Regulars tend to influence others in their choice of beer — or, in the jargon of marketing, they are trendsetters.

There are some odd details in the description of test methodology, e.g. ‘you will need cheese to give them between samples’. (Modern orthodoxy prescribes something much blander such as dry bread or crackers.) The superiority of some palates to others is also acknowledged: ‘[If] a subject correctly identifies one of two anonymous beers… what he says about the other must be reckoned with.’

‘Why market research in beer, anyway?’ asks the writer at last. ‘Why not go on producing beers that are tried and true?’

Continuing laboratory research into the process of brewing makes it possible to produce even better beers, with more varied flavours and textures, and it is in the nature of things that this capability should be exploited. Research also makes it possible to produce beers more economically by modifying them slightly. Tastes change with changes in our way of life… New (or potential) customers require new beers: not so many women would be drinking beer today if lighter beers had not been developed.

And there it is, hidden in the middle — how many corners can be cut before drinkers notice?

Finally, there are some interesting thoughts on choice and variety which would have fit pretty well into the early chapters of Brew Britannia. Rationalisation, Anonymous says, drives brewers to want to produce beers that will find acceptance when distributed more widely, even nationally — that will appeal to the widest range of tastes; or, to put it another way, that will offend the fewest people.

In line with the message coming from Brewers’ Society members such as Whitbread, the author argues that, if you look at it a certain way, mid-1960s drinkers had more choice than ever:

Go back far enough in time and you had infinite variety in British beers. Many inn-keepers brewed their own in fact. The other side of the coin was that in any one pub — which often meant in any one village — you could obtain one beer only. With the wider distribution of present-day beer, no only does every pub and every village enjoy greater variety, but also, as people travel about… they can reckon still to find their favourite beers.

The conclusion is part defence of market research, part attack on critics of the blanding out of British beer under a near-monopoly of the Big Six:

Seekers of variety should not try to put the clock back to the time of one pub, one beer… The complaint of reduced competition is virtually unfounded. The old local brews enjoyed what were virtually protected markets. The beer had to be very bad before people would walk to the next village for something different. The modern national beers are in fierce competition… Yet the picture some critics paint is of the brewers conspiring to give the public beers it does not want.

We still hear this debate playing out today — X million Doom Bar drinkers can’t be wrong! As ever, we can see merit in arguments from both sides but, as rule of thumb, there’s a hint above of what makes for a healthy local beer culture: if you don’t like, say, Greene King IPA, you shouldn’t have to walk to the next village to get something different.