Here are the blog posts, articles and news stories we’ve found most interesting in the last week, from the revitalisation of CAMRA to the difficulty of describing lager.

→ This week’s big news is that the Campaign for Real Ale has launched a project to review its purpose. We’d suggest ignoring the melodrama which was only ever intended to generate press interest — CAMRA is not going to disappear and is extremely unlikely to change its name — but do take some time to respond to the consultation which is open to both members and non-members. We’re going to mull this over and write something on the blog next week; in the meantime, you could do worse than whizz through Brew Britannia, especially chapter six, by way of background, and there’s also a chunk on CAMRA’s navel-gazing in our massive blog post from last summer.

→ Possibly related: every few months Rob Lovatt, head brewer at Thornbridge, drops a thought-provoking bomb of a blog post and, this time, has turned his attention to cask-conditioned beer:

When I moved to Thornbridge, I hadn’t really had any real experience of producing cask beer. I came from a brewing background of mainly Germanic styles, which were filtered, carbonated and packaged in keg or bottle format. I naively thought that producing cask beer would be a doddle compared with the challenges of filtration, or the trials and tribulations of running a bottling line day in day out.

→ Kaleigh at The Ale in Kaleigh has notes on Manchester’s new local-beer-only micropub, The Brink:

Manchester is home to so many breweries these days, but it can be fairly difficult to know where to get hold of their wares. Many of the city centre’s other beer bars focus more on options from far and wide which, in my view, isn’t a bad thing but it’s always nice to drink local and I think this would appeal to visitors to the city in particular.

→ Alec Latham at Mostly About Beer reflects at length upon the ghost pubs of St John’s Wood, London, with lots of lovely photos:

The rate of pub closure in the area was made clear to me when, in summer last year in the nearby Church Street Estate, I happened to see the contents of what used to be a pub called The Perseverance (I know – the irony) being sold on the street outside… Around the same time, a pub just around the corner called The Globe closed but re-opened as a fully qualified modern craft beer bar. It seems that either the business adapts quickly or disappears. The greatest tragedy is when the building is transformed into something it was never meant to be like the estate agents. You know that as a place where people dwell and drink together, it’s gone forever.

→ Justin Mason considers the state of beer and brewing on his blogging beat, which is Essex:

[There’s] an awful lot that is troubling me… The first thing that I come across time and again is inconsistency. Whether it be from cask or bottle I know that I’m certainly not alone in wanting the same taste that I remember from the last time I had the beer… I’ve been embarrassingly caught out more than once introducing friends to a beer after extolling its virtues only to find it a shadow of the previous pint.

→ There’s reassuring evidence from Jeff Alworth that having his blog sponsored by Guinness isn’t going to stop him being interesting, even when he’s writing in part about that very same brewery:

You learn a lot when you visit a country. One of the things you learn is what beer people actually drink. In Ireland, for example, we imagine that basically everyone drinks stout, the majority of it Guinness. Nope. Just like everywhere else, lager is king, with as much as (statistics vary) 74% of total volume to something just over 50%. Heineken, not Guinness, appears to be the best-selling beer in Ireland. 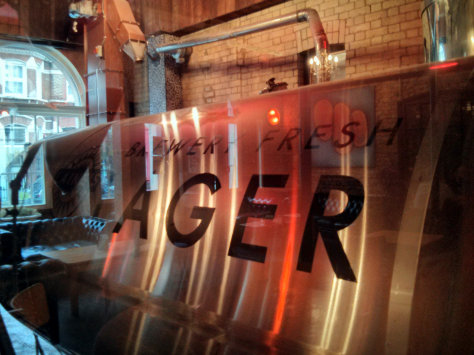 → Joe Tindall at The Fatal Glass reflects on the difficulty for the dedicated tasting note writer of finding anything to say about pale lager:

The complexity of a barrel-aged imperial stout means that tasting notes write themselves. Drinking one, there’s so much going on that you hardly have time to jot down one thought before another hits you. Lager is comparatively simple – this is a large part of its appeal, but it doesn’t make for great writing.

→ Stan Hieronymus’s contribution to the 110th beer blogging Session was clever: what if Michael ‘The Beer Hunter’ Jackson was still with us and on Twitter? (See also: George Orwell’s Beer Blog.)

→ With apologies for egotism, we’re also going to suggest that you read the piece about Cornish (or, rather ‘Cornish’) swanky beer we wrote for Beer Advocate last summer which is now available to read online:

“Swanky was a brew of sugar, hops, ginger, wheat, malt, and yeast. It had to be allowed to work for three days in the bottles before the corks were tied down with string.”

→ A few people have asked us to point them to a calendar of UK beer events. It’s hard to keep something like that up so they tend to come and go but the latest to give it a shot is Charlie ‘The Crafty Beeress’ Cohen. One to bookmark.

One reply on “News, Nuggets & Longreads 2 April 2016: Revitalisation and More”

It is my view that Diageo needs to do something “big” to ensure a robust future for Guinness Stout, in Ireland and elsewhere. There are just so many things competing with it today: not just pale lager which holds about 70% of the market in Ireland based on figures I’ve seen, but the surging sales of craft beer. Once, Guinness had that space of the special (in effect craft) beer your everyday lager, or keg in England, wasn’t. Today, malty and hoppy, roughly filtered, and unpasteurized beers are available almost everywhere and the luster Guinness had as a specialty product has faded.

Yes, it remains black and reasonably bitter, but the argument of being neither fish nor fowl has merit, in my view again.

Once before (at least), Guinness took a bold step: the adoption of nitrokeg dispense, and finally pasteurizing all formats of its stout, in all markets. This worked perfectly and suited the world and local market at that time.

Now is another time. If I was them, I would announce the re-introduction where practicable, including Ireland, of naturally conditioned stout, both for draft and other packaging. I would increase the malt and raise the attenuation, as well, for all iterations. Effective branding and advertising could distinguish between the various forms. I believe the beer could be extremely good and attract interest from the craft crowd and millenials.

Heineken (and look how well it does in Ireland) did something similar when it returned to its all-malt roots 20 years ago. This was a far-seeing move on its part. I doubt it would have the world position it does if it was still an adjunct beer.

All who know the storied and long history of Guinness must wish it well. But fresh thinking needs to be applied to ensure a vigorous future, IMO.