You know, the type that’s very pale but still has a bit of body… It’s not just about hops… But it’s definitely got hops. Yeah, you could call it balanced, but there’s a problem with that…

On our recent trip up North, without really trying, we stumbled upon a few examples of this which might, we’re beginning to think, be our favourite very specific, hard-to-pin-down type of beer.

Marble’s Manchester Bitter — currently tasting good in both bottle and on cask, by the way — is a pretty good example. It’s not like a bunch of flowers being shoved in your face but nor is it a miserable old bowl of soggy cornflakes. It’s somewhere in between. It tastes zesty, fruity, fresh and very bitter, but it’s not ‘Like drinking bloody grapefruit juice.’ Which leaves space for the actual flavour of malt — the bread-nuts-cracker chewiness that isn’t just a backdrop or a base but a pleasure in its own right.

So, that’s actually balanced, right, in a positive sense? The constituent ingredients are each allowed to express themselves fully, with none overpowering the rest. 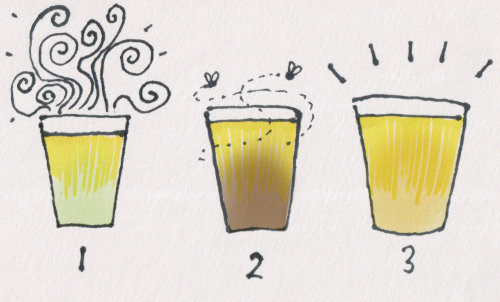 Number 1 is your grapefruit beer — a delight in its own way but ultimately one-dimensional. Number 2 is what we think of when we read ‘golden ale’ these days — it might be yellow but only in a sense of the absence of brown; it’s sweet, bland, balanced like an empty see-saw. And number 3 is what we’re into right now — a nice bit of engineering, but nothing flamboyant.

In Liverpool, we had Okell’s IPA (4.5% ABV) which we’d put into this category, though we suspect they think it’s a Number 1 – ‘Said to be hoppier than a hopping mad hopi’. And, in Manchester, at the Piccadilly Tap, Northern Monk Brew Co’s True North (3.7%) struck us as another example, as satisfying as a fresh roll ten minutes out of the oven. Down in Cornwall, Penzance Brewing Co Potion No. 9 fits the bill. (St Austell Proper Job, while hardly over-the-top, is biased towards hops over malt.)

We’re not arguing that this is a distinct style that needs a name or anything but it’s a thing we know when we encounter it.

Any others spring to mind?

42 thoughts on “That Type of Cask Ale…. You Know the One”