Here’s all the beer- and pub-related reading that’s grabbed our attention in the past seven days, from the science of hazy beer to New York dive bars.

→ Let’s get brewery takeover news out of the way: Dutch lager brewing firm Bavaria (confusing, right?) has taken a controlling interest in Belgian concern Palm. The deal includes Rodenbach, itself taken over by Palm in 1998, but not Boon in which Palm has had a stake on and off for some years. We can’t find a decent English language source but here’s one in French which Google Translate seems to cope with well enough, and a brief piece in English from Retail Detail. 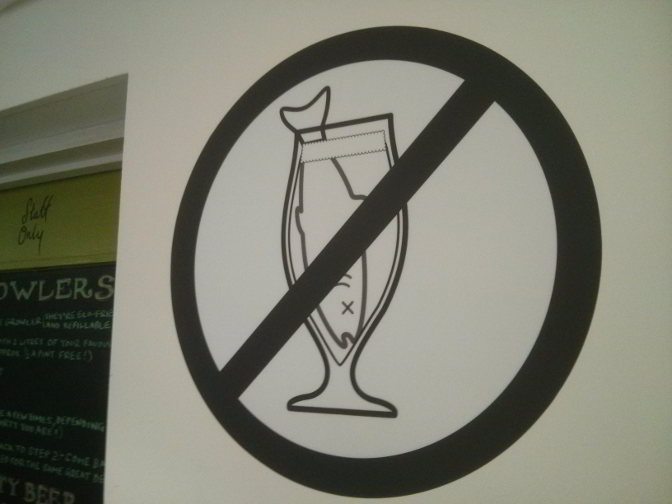 → Right, now down the good stuff. Emma at Crema’s Beer Odyssey has written a post we’ve all been waiting for: a measured, informed consideration of hazy beer. Emma is a scientist by profession and so, rather than give us a bunch of stuff that she ‘reckons’, she set out to test a hypothesis:

[My] rough hypothesis was: ‘haze = hop flavour’. I don’t necessarily see it as an exponential relationship, i.e. ‘>haze = >hop flavour’, but there is definitely a positive association between the two factors in my experience.

→ Someone has written about smoky Norwegian farmhouse beers and it isn’t Lars Marius Garshol (although he does get quoted): Martin Thibault’s substantial piece was written for Beer Advocate magazine and is now available free online. (Disclosure: we’ve done paid work for Beer Advocate.)

→ Richard Taylor at The Beercast has been watching Scottish brewery Brewmeister like a hawk for several years, exposing jiggery-pokery in their marketing claims. He now reports on the brewery’s Trigger’s-broom-like re-invention:

But towards the end of last year, Brewmeister quietly changed hands, as the original co-founders were replaced by a group of venture capitalists from Tayside… Very quickly after that, the brewery was re-branded as Keith Brewery, and relaunched back into the Scottish market… After a swiftly decisive and – I’ve got to say – very neat change of look, the Keith Brewery… have moved down a very different path to the previous incarnation…

→ The author of the Beers Manchester blog has written about his favourite pub, The Crown & Kettle. It’s a lovely piece in its own right but made us think we’d like more people to do the same, perhaps using a shared hashtag.

→ On a related note, for Serious Eats, Shane Mitchell provides an evocative account, almost in virtual reality territory thanks to the colourful accompanying photography of Vicky Wasik, of her favourite New York dive bar, Jimmy’s:

Here, it seems, it’s forever 1971. That’s the year the bar opened, in a three-story walk-up, now shadowed by higher-rise buildings on both sides and what seems to be permanent construction scaffolding out front. A blue sidewalk awning and a small window, illuminated by a Samuel Adams neon sign, are the only indications the bar even exists at all.

→ Wine writer Jamie Goode makes some interesting observations about how geeks make it harder for those coming up behind them. Anyone who has ever been made to feel that they shouldn’t talk about beer until they’ve been studying it seriously for 40 years will nod their head at this. (Via Alan McLeod on Twitter.)

→ And, finally, there’s this cartoon by Tom Gauld for New Scientist:

Tried to post a comment on Crema’s site, don’t think it went through (I don’t know why I can’t master Google sign in), so I’ll state it briefly here. My view is, more haze means more yeast taste. This is based on decades of tasting including many blind tastings of bottle-conditioned beers poured in different ways.

Some like the taste of the hazy style, some don’t. English brewers did everything they could historically to avoid it. Now it’s different, due to the influence of American practice which, in my opinion, probably developed from a misunderstanding of what unfiltered meant in English brewing. But anyway, there it is.

I prefer the malt and hops to have the say in beer. Yeast much less so. It’s interesting to look at German brewing where cloudy beers became isolated to a negligible part of the market – it’s because (surely) the beer tasted better that way. Same history in England. But nothing is forever and perhaps the cloudy stuff is here to stay. We’ll see.

Quite right , hazy = more yeast flavour . Bright/ clear beer = more malt & hop taste and aroma .
There is , a very good reason brewers have been working for a very long time towards optimal clarity in the vast majority of beer types , simply put : Clear beer allows a better taste in the final product.