The last of five beers chosen for us by The Beer Nut (@thebeernut) is a wood-aged brown ale made with 20 per cent grape juice and an 8% ABV.

It’s another expensive one, this: we paid £13.50 for a single 375ml bottle from Beer Gonzo. It’s a very pretty bit of packaging — a rather Belgian-looking naive pencil sketch on the label and blue foil around the cap, all of which maybe explains 15p of the total cost. The rest, we assume, is made up of the unofficial artisan tax (a levy to cover the pursuit of hopes and dreams), import duty, and cuts for middle men at various points on the long road from Marentino.

Popping the cap triggered a low-key, consipiratorial ‘Psst!’ and released a waft of strawberry scent. There was some noisy fizzing as it went into the glass and a head of pink foam flowered but only for a second leaving us with something absolutely still and mirror-like.

When you have a flat brown-purple liquid in a stem glass it’s hard not to think of red wine. It was at this point we (bright sparks) noticed the lad on the label with his bunch of grapes and picked our way through the Italian text on the label. In Chapter 16 of Brew Britannia, ‘The Outer Limits’, we wrote about The Wild Beer Co’s Ninkasi, a ‘celebratory drink’ that defies categorisation as beer or cider; Beerbera would seem to be an overseas relative. We admit to being intrigued by this kind of thing which makes us wish we knew more about wine. (On which, purely for educational reasons, we can confirm baby steps are being taken.) 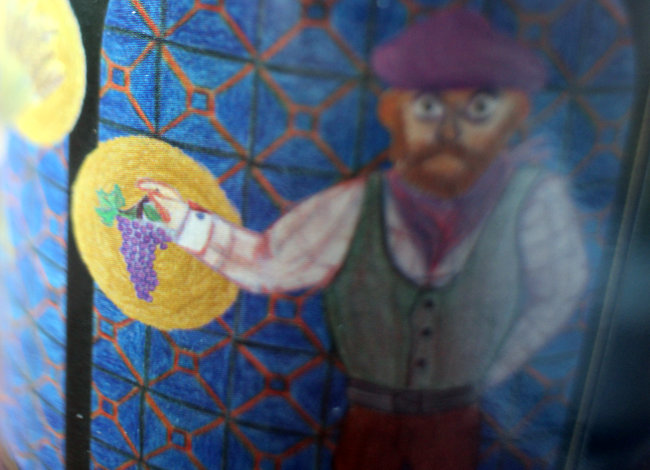 We instinctively liked it from the first sip. All that mucking about could have resulted in something silly and gimmicky but, no, it is interesting and surprisingly balanced. (And that’s not code for bland.) There is some sourness from spontaneous fermentation but it’s quite tame compared to, say, Cantillon Kriek. The latter is a more interesting beer altogether but it’s no bad thing that Beerbera is similar but more accessible. (Price aside.)

We identified a big hit of vanilla, especially in the aftertaste, and something like cherry-flavoured cough drops (grape + acid?). We eventually settled on one headline social realist tasting note: those rhubarb and custard boiled sweets from a jar on the newsagent’s shelf. All good fun stuff. There’s a bit of funk there, too — just enough to make clear that this is a grown-up beer. And, despite the list of tuck shop flavours, it’s actually on the dry side.

Overall, it’s a hit, and one we’d probably drink again if we saw it going for a fiver or less. As it is, there are affordable Belgian beers, and indeed British ones, that do many of the same tricks without undertaking a cross-Continental road trip.

BeerBera is brewed with classic Piedmontese Barbera grapes and tastes to me quite like a kriek, having a pronounced sour cherry flavour but also some lovely earthy brett notes.

That third round of Magical Mystery Pour has been great fun, if both budget-busting and challenging at times. It’s good to have finally taken some tentative steps into Italian beer and to have expanded our experience of the sour and/or funky. Thanks, John!

Next up, a batch of beers chosen for us by David Bishop (@broadfordbrewer and @beerdoodles).

That beer and brewery were one of the most impressive discoveries on my Beer Bible tour. Valter Lovelier inoculated the wort with Barbera grapes (hence the name), and then used that inoculation to seed his foeder. The way you describe it is what I encountered in all his beers–light acidity and funk, rich ester profile, somewhat unusual fruit flavors, and wonderful balance. One of my faves.