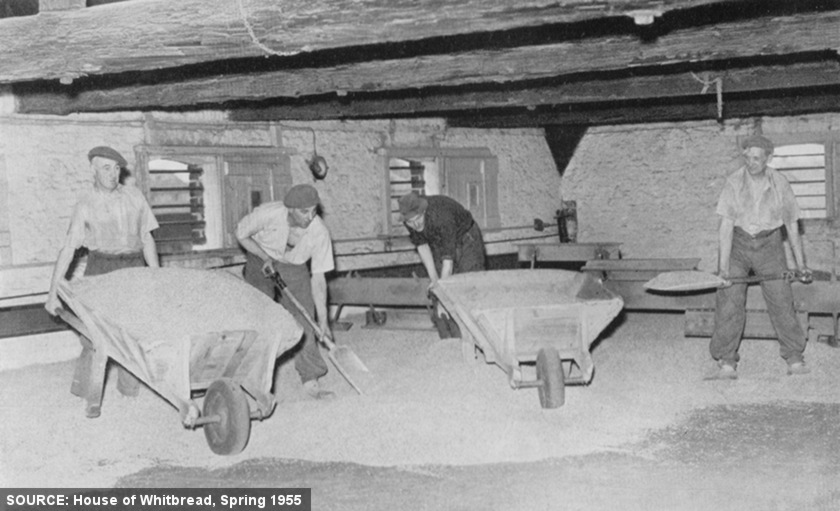 ‘The Other Fellow’s Job No. 10: The Maltster’ by Richard Hilton, House of Whitbread, Spring 1955, with photographs by P.M. Goodchild.

“In these modern times, when machinery has largely replaced the hands of the craftsman, one might think that the ingredients of beer are largely subjected to numerous mechanical processes in the course of their evolution. And many of them are — but the malting process is one that has stood the test of time, and remains the secret of the craftsman who transforms the corns of barley into that most valuable ingredient of all — malt.”

“When a new load of barley arrives at the maltings, the first men to handle it are the granary hands. It is their job to dry the barley to about 12 per cent of moisture so that it can be kept in bulk without deterioriation; next, they clean and ‘screen’ it to extract the small or broken grains… Typical of the granary hand at the Whitbread maltings in East Dereham in Norfolk is Chris McCabe. An Irishman, 64-year-old McCabe started with Whitbread’s eleven years ago, and takes great pride in his work…. Before he came to East Dereham he worked in large maltings in Ireland.”

“The job of the maltster begins where the granary hand leaves off, with a process known as ‘steeping’. This simply means that the grain is soaked in water in a special cistern or steep for forty-eight hours. During this time the water is changed and aeration may take place. Then the barley is allowed to drain in the steep for another few hours, after which it is generally ‘couched’ in a frame — to enable heat to accumulate quickly…. Sometimes the couching is dispensed with, and the grain is laid directly out on the malting floor, where the process of germination begins.”

“To begin with, the ‘piece’, as it is called, is laid out about nine inches thick in order to accumulate heat and start germination. As soon as this happens, the pieces is thinned out and spread over more floor. At the same time it is turned daily to prevent undue root growth, and, from time to time, ploughed, or loosened by means of a large rake…. The foreman works exactly according to his own judgement based on long experience.”

‘The Other Man’s Job: The Maltster’ by A.R. McPherson, The Deerstalker, Mitchells & Butlers, December 1958, photographer uncredited.

“No doubt methods of malting in ancient days were very primitive, and even up till about fifty years ago, there has been very little change in the process, and much of the malt for brewing purposes is still hand-turned…. However, in more recent years improvements have been effected, such as the replacement of flat-bottomed cisterns by hopper-shaped ones, which are self-emptying, by the introduction of elevators and conveyors for handling grain, by the use of mechanical hoists instead of hand-operated winches for raising sacks or skips, and the mechanical turning of the grain on the kilns.”

“[In the last decade] the intake of the harvest has become a major problem owing to the ever-increasing use of combined harvesters, which cut and thresh the [barley]corn in one operation, so that the majority of the grain floods on to the market as soon as it has been harvested…. This means our buying period has been reduced from about six months to about two months, which has necessitated providing additional storage and ‘seating’ facilities to cope with the influx of barley at approximately three times the former rate.”

“Whitsun 1968 marked the end of yet another era for John Smith’s when the last sack of malt was delivered from our Maltings at South Milford to the brewery at Tadcaster… Having installed bulk malt handling facilities at the Maltings and at both our breweries the transporting of malt now follows the pattern of modernisation seen throughout the Group.”