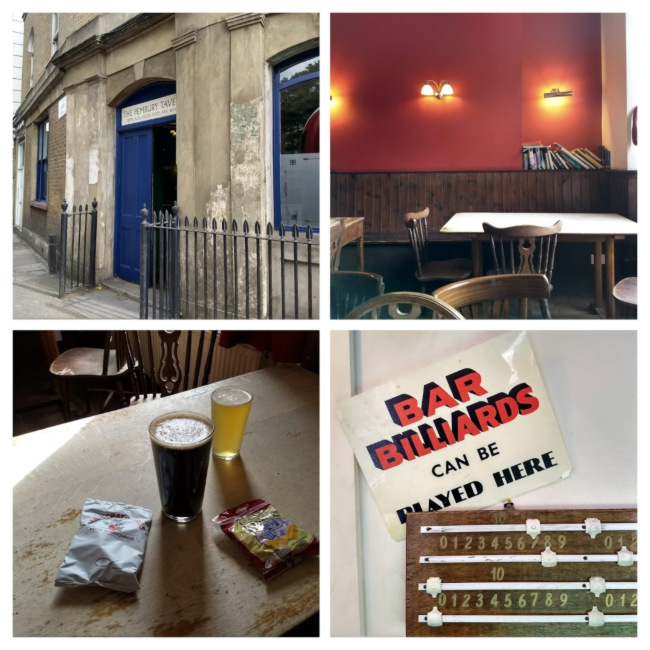 The Pembury Tavern at Hackney Downs, one of the pubs where we learned about beer, has commenced a new phase as the Five Points brewery tap.

When we were first beginning to develop a serious interest in beer, in around 2005-06, we ended up at The Pembury because friends who knew more than us told us it was a must-visit pub. After years of neglect it had been bought and refurbished as a proto-craft-beer-bar — clean, plain, with a vast range of hand-pumps, and bottled beers from Germany and Belgium.

It was also a non-smoking pub before the ban was introduced, sending a very clear signal about the clientele it sought or, rather, wanted to exclude.

Circa 2006 Hackney Downs was posher than it had been 20 years before, but still less posh than it is today, with a lingering sense of wildness. For typical Pembury customers — overt CAMRA types, board-game nerds, hippies, and assorted oddballs not quite cool enough to pass their idiosyncrasies off as hipsterism — the scurry to and from public transport could be an anxious business. That people kept putting themselves through this ordeal is a testament to how welcome a bolthole The Pembury was.

When we left London in 2011, though, the shine had gone. The beer range diminished and what was left no longer seemed terribly exciting in the age of the Craft Beer Company, and with hipper venues popping up all over Hackney. When we checked in a couple of years ago, things were worse again — a dreariness, weariness, had settled over it all and we struggled to find anything decent to drink.

When we heard earlier this year that Five Points had taken over the pub we immediately thought, oh, that’s good news. It’s a beautiful building in a great location and it makes sense for it to be tied to a local brewery rather than one in Cambridge, and we were also excited at the idea of being able to taste all of Five Points’ beer in one place, presumably presented at its best.

On Saturday last, working around some personal business, we managed to find a couple of hours to investigate in person.

First impressions: the pub has been brought back to life. The whitewashed walls are now either rich green or vibrant red creating a sense of intimacy that used to be lacking. Heavy curtains dampen the once troublesome acoustics, and well-worn wooden furniture underlines the impression that this is a Proper Pub, only updated, rather than an outpost of Craftonia.

We were pleased to see, too, that the gamer geeks haven’t been driven away, and that locals (both posh, and less posh) are still using the pub. If any constituency has reduced its presence its the hippies, but perhaps that’s true of London in general these days, or of 2018.

The staff were energetic and efficient, serving Five Points’ beer in what we’re sure must be the best condition possible, in beautiful branded glassware, at what felt like reasonable prices for London. There is also unfiltered Budvar and a range of guest beers on keg, cask and in packaged form. All of the Five Points beers we tried were at the very least good, and it’s such a pleasure to be able to buy a pint of cask porter in East London.

The standout for us, though, was Five Points Pils. We enjoyed the canned variant  but the draught is on another level — so fresh tasting, hazy but not dirty, and full of blossom and perfume.

We would say, based on this trip, that The Pembury is once again worth going out of your way to visit if you’re a visitor to London, or rarely make it out east, especially as it is only 15 minutes out of Liverpool Street on the train.