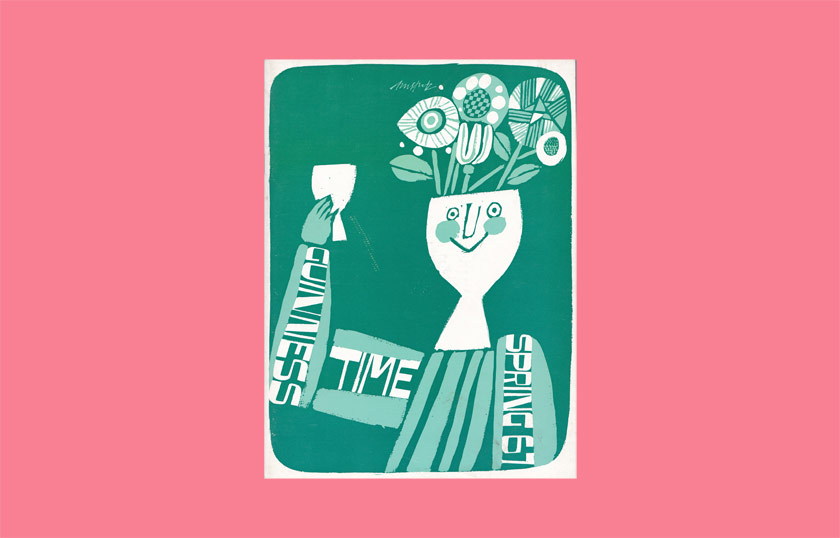 We’ve shared a few accounts of how Guinness was produced in its heyday and here’s yet another, focusing on the conditioning and packaging stage.

It comes from the spring 1967 edition of Guinness Time, the staff magazine for the London brewery at Park Royal, and picks up on a piece from winter 1966 on the brewing process proper which, unfortunately, we’ve never managed to get hold of.

Here’s where this piece begins:

Storage – The beer is stored in large stainless steel vats, the two largest of which can each hold a whole day’s brew, about 160,000 gallons. The beer remains in storage vat for between three and ten days and during this period a certain amount of maturation takes place…

The section that really grabbed our attention, because it provides specific detail about a sometimes mysterious part of the process, is entitled ‘Make-up’:

Beer cannot be despatched direct from the storage vat, for it is quite flat and tastes rather uninteresting in this state. So to form the famous Guinness head when the beer is poured and to give it life and sparkle when it is drunk, we blend in a small of amount of gyle, which is beer containing malt-sugars and yeast… but which has not been allowed to ferment. This we achieve either by using the beer immediately after declaration to the excise officer or, if we want to use it the next day, by chilling it in the storehouse…

The blending of the gyle with storage vat beer is known as the ‘make-up’ and takes place daily in the racking vat. It also affords an opportunity of blending several days’ brewings together, to even out the inevitable small differences that exist between different days’ brewings. Various other beers are added, such as barm beer from the yeast presses, which are pasteurised before the make-up.

Meanwhile, in the racking vathouse, Draught Guinness will have been made up in the same way as the Extra Stout but with a slightly lower proportion of gyle since the beer is processed rather differently. The aim of this processing is to turn the still rather unexciting racking vat beer into the attractive palatable final product, for when Draught Guinness leaves the brewery it must be in all respects ready for drinking.

After conditioning in tanks, the beer was run through a pasteuriser at 190°F (88°C) before being put into specially designed casks (kegs).

First, there’s an acknowledgement that without blending with mature beer, Guinness was a bit boring.