Here’s all the writing about beer and pubs that leapt out at us in the past seven days, from track and trace to the wonders of the Finnish language.

As the reopening of UK pubs grows ever nearer, with all the trendlines currently pointing in the right direction, everyone is watching anxiously for details of how it might work in practice. This week’s big story was the news that everyone will be expected to sign in when they go for a pint, probably until as late as September:

All customers will have to sign in on entry, not just one member of the group like before. It is also unclear whether payment at the bar will be permitted… UK Hospitality said it would burden struggling pubs and staff and risk customers deciding not to go out… The government said it was providing as much flexibility as possible to venues… It also said it had removed other unpopular requirements such as drinking curfews.

Perhaps because we’re not in the habit of going to the pub in groups larger than, say, six, this doesn’t seem outrageous to us. And by autumn last year, signing into pubs had become really quick and easy anyway – a 20-second job.

When we wrote about our perception that some breweries had experienced a better 2020/21 than others, Ed Wray promised to investigate and provide further data. He’s now done that, offering notes on the four breweries based at the site where he works:

All of the breweries have done badly financially. For the two that are parts of larger companies I’m sure it’s a drop in the ocean compared to their overall financial performance (which will also be down lots for both). I don’t know any details about their money situation but both breweries are or will be soon increasing beer production, so don’t look like they’re having the plug pulled on them. The brewery that exports to the states definitely lost a chunk of cash but I believe now has a new importer so hopefully will be able to continue as before in the future. And as to my employer, it’s had to defer payment on some things (which will of course still become due for payment later) and take out a loan. Expansion plans have slowed, but not stopped entirely. One of the things put back is getting a canning line. Cans have done well during lockdown so there’s now a shortage of them and it doesn’t make sense to install a canning line if you can’t get cans.

For VinePair Evan Rail has written about the different meanings of ‘craft beer’ around the world, according to those in the trade:

It’s not easy to find the right equivalent for “craft beer” in Finnish, according to Suvi Sekkula, a journalist, service designer, beer lover, and the chair of Kieliasiantuntijat ry, a Finnish trade union for language and communications experts… “The question is a tricky one in Finnish, as there is no strong consensus,” Sekkula says. Currently, she says, three competing terms are being used in her country: pienpanimo-olut, meaning “beer from a small brewery,” käsityöläisolut, or “beer made by a craftsperson,” and erikoisolut, which means “speciality beer.”

At Oh Good Ale Phil has been blending Orval with Harvey’s Imperial Stout – a great, if terrifying idea. He seems to have enjoyed the experience:

That word ‘blending’ is the key: it seemed to combine three quite distinct flavours (none of them very ‘beery’), but in a way that seemed perfectly natural and without any incongruity. Full-bodied – almost but not quite to the point of drinking its strength – and smooth; really very smooth… Was it worth it? A cautious Yes, I think: the 3:1 and 1:3 mixes were terrific, even if the 1:1 left something to be desired. At least, it was worth it as far as the IEDS was concerned. The stout was very much in charge throughout: even at 3:1 Orval to IEDS, you’d never mistake what you were drinking for a pale beer. The ‘black and tan’ effect – where two very different beers effectively shave off each other’s sharp edges – took the roughness out of the IEDS, making it drink smoother and sweeter; but the Orval wasn’t smoothed so much as muted, losing the Brett and some of the bitterness. 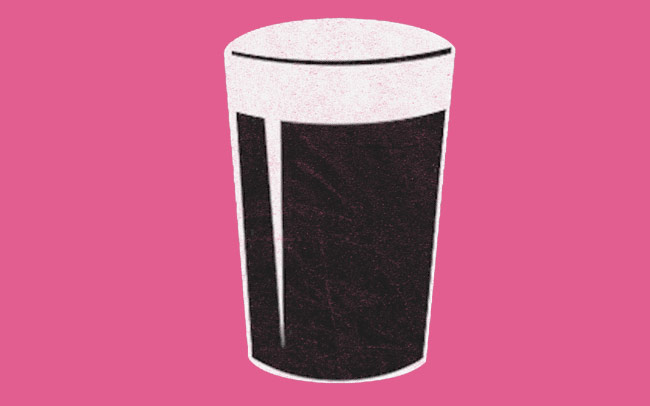 For Ferment, the promo mag of a beer subscription service, Siobhan Hewison offers a handy summary of trends around nitro beers – something, we admit, we know relatively little about, though we do have one on the fridge waiting to be drunk right now. She says:

[Many] brewers have been attempting to ‘hack’ the chemistry of getting nitrogen into their beer without using widgets, by dosing the beer and/or the packaging with liquid nitrogen. This does however rely on drinkers using the ‘hard pour’ method in order to get the best drinking experience. This is a very specific way of pouring a nitro beer, which asks you to forget everything you’ve been taught about gently pouring your beer at an angle into your glass – you must first invert the can or bottle a few times (but don’t shake it!) to get the bubbles flowing, let it sit for a few seconds, then crack it open and angle at 180 degrees so the beer pours aggressively into your glass. Let the beer rest and the velvety, luscious head form, and voila! The perfect nitro beer, right in your hands.

Last week, Kelly from Good Chemistry highlighted a post we’d missed, from (we think) Chris Rigg, landlord of The Bay Hop micropub in Colwyn Bay. It’s a detailed account of the ups and downs of the past year, including some really interesting details:

At the beginning of 2020 we had come up with a vague plan to expand the number of keg lines from three to five. While lockdown seemed like a strange time to expand the range of products, it made sense to bring those plans forward. Keg doesn’t have the same short shelf life of cask, and it would allow us to continue to provide a varied selection of beers throughout without worrying about wastage. So, with the first of the Government grants in our pocket we took the leap. Looking at what we needed to provide the same styles punters were used to on cask, we decided to go for seven lines rather than the original planned five. Mike Cornish of Beer Care was called in and the job was completed in just a couple of days… It is fair to say that increasing the keg lines was the best decision we have made in the past year. There is no doubt that it has made the takeaway service worth doing, and that without it we would have not operated at all or – in the worst case scenario – not been here at all now.

Finally, from Twitter, news of a podcast about pubs that might be worth a listen, with the first episode due in a week or so:

One reply on “News, nuggets and longreads 3 April 2021: käsityöläisolut”

a great, if terrifying idea

It does help if you’ve got the best part of a case of Orval in the garage! Although that was my last IEDS…