It turns out we’ve now got four pubs serving decent and interesting beer within a ten minute walk of our house. We’re spoiled.

The Old Rose and Crown on Hoe Street in Walthamstow, in east London, used to be a cool but down-at-heel pub with rotten beer. It was taken over by new management a year or more ago and the decor improved. Sadly, the beer didn’t.

They’ve obviously been working hard since, though, and this year have deservedly made it into the Good Beer Guide. Having decided to give them another go, in the last couple of weeks we’ve enjoyed fantastic pints of Hopback Crop Circle and Edwin Taylor Extra Stout (a great beer, full of flavours of bitter chocolate and smoke).

With the Nags Head, the William IV, the Village and now the Rose and Crown, we can say without any irony that Walthamstow is worth 20 minutes on the tube and an hour or two of your time if you’re at a loose end in London.

Even our local off-licence is worth a look — it’s now a Spar franchise, but the beer’s got even better, with all the old stock plus Sambrook’s, Brodie’s and a few other breweries we’ve never come across before.

The Pembrokeshire coast path, in South Wales, features 186 miles of gorgeous cliffs, hidden bays — and the occasional wonderful pub. I don’t mean that there are lots of pubs and only some of them are wonderful — more that pubs are spaced quite far apart in this part of the world, possibly something to do with widespread Nonconformism and therefore teetotalism. There are exceptions, for example Little Haven has three pubs, and I’ve already written about Solva. They must have been very sinful places.

END_OF_DOCUMENT_TOKEN_TO_BE_REPLACED 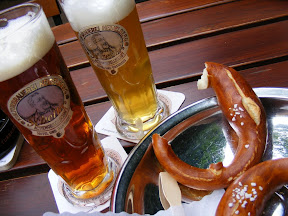 Anyone who tells you that Britain has some kind of monopoly on binge drinking and rowdiness obviously hasn’t been to this borderline twee university city. Perhaps it was the football, or maybe the warm weather, but the local youths were certainly full of beans as they barreled around the old town knocking back tequila and chanting:

Which is not to say that it was remotely threatening. Rather charming, in fact. They were probably singing the same song at the university of Heidelberg in the 19th century. At least these days they don’t cap a session in the pub by dueling and scarring each others faces.

We spent a couple of lunchtimes in local brewpubs which, again, we found through this website.

Vetters is the best pub in terms of atmosphere and we were impressed by their relatively adventurous approach. Their seasonal special, “Heidelberg Frisch” is a Koelsch-style “obergaeriges” beer served in 200ml stick glasses – something we’ve never seen outside Cologne before. They also offer a ludicrously strong barley-wine type beer, Vetters 33. This has an original gravity of 33%, pours black with a brown/yellow head (saffron!?) and tastes mostly of treacle cut with vodka. Not that nice, in itself, but a refreshing change from the endless premium pilsners…

Scheffel’s Kulturbrauerei is a bit snooty inside, though it has a nice garden, where we took this picture. Their range includes a remarkably good kellerbier which, once again, reminded us of an Alt, or perhaps of a Belgian special. It was amber coloured, bitter and with a lot of orange flavours. The krauzenbier was good, too – very light, almost Hoegaarden like, with grapefruit and lemon flavours. We thought it might be missing a bit of malt flavour, though.

There are plenty of other pubs in Heidelberg – Unterer Strasse (parallel to Hauptstrasse and the Neckar river, up near the Marktplatz) is a good place to start, with a range of places from young and trendy to old and trad. There’s a place where you can get a range of Hoepfner brews, although unfortunately not their porter.

Vetter im Schoeneck is on Steingasse, just off the Marktplatz leading down to the Neckar. Kulturbrauerei is on Leyergasse, parallel to Steingasse about four streets east. Both are handily listed in the Lonely Planet guide to Germany.

If you like beer, York is a great place to spend a few days. And that doesn’t just apply to fans of real ale.

From our experience, you can’t go too far wrong following your instincts in York — if it looks a friendly pub, it probably is — but here are some pubs we tried and liked.

END_OF_DOCUMENT_TOKEN_TO_BE_REPLACED

It’s Shrove Tuesday (aka Pancake Day). I love pancakes, don’t get me wrong. But isn’t Shrove Tuesday in Britain a pretty tame celebration, compared to the multi-day benders that go on in many parts of the world?

The Rhineland goes in for carnivals in a big way. Whilst we were in Duesseldorf a few weeks back, we saw plenty of posters advertising the big events to come. The Cologne carnival is even more famous.

I wish I was in Cologne, drinking koelsch tonight.

And that reminds me — we haven’t posted our postscript to our trip to Duesseldorf — a brief round up of a couple more cheeky koelsches downed between train connections.

On the way out, it was a visit to the Gaffel brewery tap in the Alter Markt. Gaffel’s pleasant enough, particularly when it’s the first beer of the trip. However, more exciting was the fact that we saw the very waiter from the photo that illustrates the “Cologne and the Northwest” section of the Eyewitness Guide to beer.

On the way back, we thought we’d pop into the famous Frueh am Dom, which had always looked too touristy/busy to visit on previous trips. It being a wet Monday afternoon in January, there was plenty of room, even with all the businessmen and their suitcases, awaiting their train connections. It’s a nice place. The brew itself is a very clean, crisp koelsch, very refreshing but not one of the more interesting ones (in our humble opinions).

Highlight this time round was Peter’s Koelsch, from their outlet in the old town. We seemed to have missed this on our first crawl round Cologne. You can definitely taste the ale in this one — fruity and almost sulphurous. We liked it.

A map containing all of the places mentioned here and in our previous post can be found on Ron Pattinson’s European Beer Guide, here, which also has stacks of other interesting information. You can also follow this link for Ron Pattinson’s various koelsch crawls, all entertaining reads.