Lots of people seem to rate T.E.A. (Traditional English Ale) by the Hogs Back* brewery. We’ve had it on a number of occasions (on cask and in bottle) and never really liked it. There’s just something a bit acrid about it. So we’ve never made much of a point about seeking their stuff out.

However, the other night we were in Stonch‘s pub, and he got out some of their OTT, a 6% old ale. As he says in his post, it had a “surprisingly sour, funky character”, tasting almost like an Oud Bruin. It worked extremely well and was very tasty, but we did wonder whether it was supposed to taste like that.

We’ve just drunk a bottle we’ve had stashed away for a while, and it’s a very different beer. There are elements of a dark Belgian beer like Ciney Brune in the nose and mouth. I suppose there’s a hint of sourness right at the end, but you would not call this a sour beer. It’s much more fruity. It’s very pleasant. I don’t know which I prefer — this version, or the potentially “off” bottle we had the other night!

Anyway, this made us keen to try the rest of the Hogs Back stash we’d accumulated over the years. Burma Star Ale is 4.2%, and a percentage of the revenue goes to the Burma Star Association. It’s a well-rounded, red ale, with spicy, fruity aroma. An almost creamy maltiness gives way to a nutty, dry finish. Nice.

Then came Wobble in a Bottle, which packs a powerful punch at 7.5%. It didn’t look all that great — the head vanished almost instantly — but this tasted like a good Belgian abbey brew. Similar sugary-fruity-chewiness. I really enjoyed this one.

Finally, we had to try T.E.A. again. I would love to say that the conversion process was complete, but it still didn’t work for us. But it made wonderful beer-rye bread.

*And there’s another lack of apostrophe to wind the Beer Nut up.

A Jewish friend of mine recently said he hated going to his favourite kosher restaurants with non-Jewish friends because he felt accountable for the terrible time they would inevitably have: “If it wasn’t for me and my dietary requirements, they could be in a nice restaurant eating food they’d actually enjoy!”

The funny thing is, I feel very much the same about pubs that cater for the beer geek.

I go to those kind of pubs frequently with Boak, and with those of my mates who are bothered about beer, but the couple of times I’ve gone with people who aren’t that fussed — normal people — they’ve really hated them.

A pub which, on previous occasions, has felt as relaxing and cosy as my own front room suddenly becomes cold and rather lonely. I find myself trying to make people like the pub; making apologies for it; defending it.

It’s just like when I made my brother watch Peep Show and he didn’t laugh once.

The pub should be fun. Being (perhaps justifiably) berated for making people go out of their way to get to a “weird, silent pub full of weirdos”, just isn’t.

Maieb touched upon a similar issue a few months ago.

The small Welsh hamlet of Solva has three pubs within a hundred yards of each other, and there’s at least one more up the hill in Upper Solva. Only the Harbour Inn is mentioned in the Good Beer Guide (2007) but the other two are also worth some love.

The Harbour Inn has the best location, and therefore the lion’s share of the punters. It has fine views across the harbour and an ambitious menu. Beer-wise it’s a Brains place, offering the regular bitter and Reverend James. I have to say, I’m not a massive fan of these two. Perhaps I’ve never had a really good pint, but they really don’t do very much for me.

It’s cosy, and the young chap behind the bar was very friendly, although I didn’t much care for the older chap chasing families with children into their own special ghetto. “Dogs are fine, it’s children I can’t stand,” he said cheerfully to a couple on the next table from me. That’s Britain summed up for you.

Almost next door to the Harbour Inn is the Ship Inn, which also doubles as the Spice Galley, an Indian restaurant/takeaway. I’d never been in this place before, and rather expected it to be an unfriendly locals’ place. The barman ignored me initially, but I’ll give him the benefit of the doubt, as he may not have seen me. I’m quite small.

It’s a Marstons pub, so had Pedigree and Long Hop on. They’d just had a beer festival, so on the other two taps were specials from that — something by Banks, and Golden Thread by Salopian. I went for the latter, and it blew my mind. I don’t think I’ve had a better pint this summer. It was in perfect condition, with a creamy head, and a gorgeous hop aroma. Flowery hops dominated the flavour but there were also hints of banana and clove in it. Wonderful stuff. I would have stayed to drink more, but I had one more pub to check out before the bus was due.

The Cambrian Arms looks a bit like a hotel bar and also has interesting food. On tap they had Tomos Watkin’s OSB which has a lovely heavy malt & marmalade flavour. They also had Bevan’s Bitter, from the Rhymney Brewery. This was a good deal hoppier than the TW, but beautifully balanced. I also had their Rhymney Bitter in the Farmers Arms earlier in the week, and was impressed. I reckon that the Rhymney brewery is a welcome new addition to the Welsh brewing scene.

The Cambrian Arms also had Butty Bach, by the Wye Valley brewery, but I didn’t have a chance to reacquaint myself with this delightful drop as I could hear the bus coming down the hill.

Solva is served by semi-regular buses Mon-Sat between Haverfordwest and St Davids. It makes an excellent end point for cliff walks from Newgale or Caerfai, St Davids. Just give yourself more time for the beer before the last bus leaves…

The Rhymney brewery is a comparatively new Welsh brewery. It was started in 2005, but is keen to draw links between it and historic breweries from Merthyr Tydfil. It has an interesting page about these breweries on its website.

Last Monday’s edition of New Tricks focused on beer and breweries. The story was ludicrous even by the usual standards of this programme (which we kind of like…). It had the team investigating the 10-year-old case of the death of a promising young brewer in a fermentation vessel at a traditional family brewery. However daft the plot, which features a secret beer recipe, arguments over the provenance of the malt, and brewing dynasticism, there’s plenty for the beer geek to enjoy:

You can enjoy it for yourself through BBC I-player. But you’ve only got until 21:00 on Monday 11th. 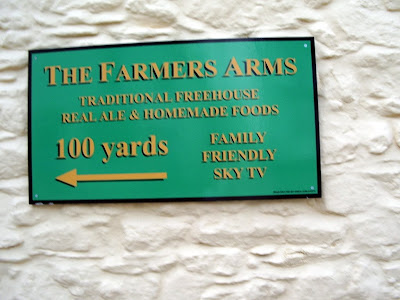 If I had to choose my favourite pub in the world, it would probably be the Farmers Arms in St Davids, Pembrokeshire. This isn’t because of its beer offerings or even because of the great atmosphere, but because all my early pub memories were formed here.

When I was growing up, we went to the Pembrokeshire coast every year for our annual holiday, sometimes as a family, sometimes with a large group of my parents’ friends as well. It’s a very special place for me, and I try to get back there every couple of years at least. St Davids itself keeps evolving – I remember it being a sleepy village for hardcore hikers in the 1980s, a bucket-and-spade resort in the early nineties, and now it’s like Hampstead-on-sea, with posh restaurants, and artists selling paintings to each other.

Because of its large beer garden, the Farmers was open to kids, and so was probably the first pub I ever went to, and certainly the first pub I remember. And obviously, because I was always there on holiday, the memories are all pleasant. When I walk into the beer garden now, there’s a little bit of me that’s five years old, really excited about going to the beach.

I tasted beer there for the first time, a sip from the parents’ pints. Urgh — how can they drink that stuff? I observed the pleasure that my parents and their friends got from drinking and chatting in the afternoon sun. I learnt that drinking too much makes you boring and repetitive. And then did it anyway, when I was old enough.

Here I also developed my strange love of pub fish and chips. Yes, I know it’s usually frozen fish and oven chips. But we didn’t eat out much when I was growing up, and so it was always a bit of a treat, and continues to be now I’m older and can afford to eat better stuff.

As a sulky teenager, I continued to love the Farmers, even before I could drink. Its status as the only pub in town has always made it a lively place, the centre of the social scene for young and old alike. There are always a surprising number of young people in St Davids — surfer types, I always assumed.

I’ve just spent an afternoon there with my mum, and it’s as charming as ever. Reverand James (Brains), Double Dragon (Felinfoel) and Rhymney Bitter on tap, all in good nick. Friendly bar staff. Same great view out of the beer garden. I’m sad to be missing GBBF, but extremely contented to be here instead.

The Farmers Arms is on Goat Street. You don’t need a map to find it as St Davids is a pretty small place. However, it is officially a city (the smallest in the UK) thanks to its beautiful 12th century cathedral. Its population is fewer than 2000 people, although this probably quadruples during the summer. These days it must also have the highest percentage of espresso machines per capita in the world.