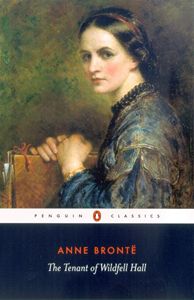 ‘I don’t take wine, Mrs. Markham,’ said Mr. Millward, upon the introduction of that beverage; ‘I’ll take a little of your home- brewed ale. I always prefer your home-brewed to anything else.’

Flattered at this compliment, my mother rang the bell, and a china jug of our best ale was presently brought and set before the worthy gentleman who so well knew how to appreciate its excellences.

‘Now THIS is the thing!’ cried he, pouring out a glass of the same in a long stream, skilfully directed from the jug to the tumbler, so as to produce much foam without spilling a drop; and, having surveyed it for a moment opposite the candle, he took a deep draught, and then smacked his lips, drew a long breath, andrefilled his glass, my mother looking on with the greatest satisfaction.

‘There’s nothing like this, Mrs. Markham!’ said he. ‘I always maintain that there’s nothing to compare with your home-brewed ale.’

‘I’m sure I’m glad you like it, sir. I always look after the brewing myself, as well as the cheese and the butter – I like to have things well done, while we’re about it.’

Nice to see that a good head was preferred on a pint even back then (although Anne was a northern lass, of course, so she would be that way inclined).  It’s also a good reminder of the fact that making ale was women’s work until comparatively recently.

Gamini Salgado’s The Elizabethan Underworld is a fairly obvious attempt to follow the success of Kellow Chesney’s The Victorian Underworld, which itself was an update of Henry Mayhew. Nonetheless, it’s a fascinating read, especially for those interested in London’s pubs.

The first thing to note is that, according to Salgado’s sources (all fully referenced and quoted at length), Elizabethan pubs were full of con-artists, thieves, pimps and whores. A ‘cony’ was anyone new in town, usually an innocent looking bloke from the countryside, who could be preyed upon by these criminals, therefore known collectively as ‘cony-catchers’.

In short, the Elizabethan pub was a kind of trap for bumpkins.

There were different grades of ordinary and tavern into which the cony was lured by the cony-catchers, ranging from the fashionably expensive to the squalid.

The latter sounds interesting, with more beer being consumed than wine, unlike the other types of establishment. According to Salgado, alehouses proliferated in the 16th century because people got fussy about their beer and were no longer keen to drink nasty homebrewed ale. Bigger brewers would sell commercial beer to amateur back-room landlords on credit, who would then only need to find a few tables a and chairs to make a bit of cash on the side.

Sadly, no mention is made of Pimlico Ale, which continues to intrigue us.

This is another in our series of pub guides for time travellers. See this post for info on London in the 1960s.

Beatles biographer Hunter Davies‘ New London Spy was published in 1966. It’s a travel guide aimed at cool people, and an excellent window onto the city at the height of its hipness.

In his lengthy section on pubs, Davies makes some interesting observations:

Pubs are what other countries don’t have. In England, country pubs are perhaps nicest of all. After that come the London ones.

Pubs change character as you tipple down from the top of Britain. In the dry areas of Skye you have none at all. In Glasgow they are just drinking shops. In Carlisle they are cheerless and state controlled.

But in London, there are pubs for all men and for all seasons.

He then goes on to classify London’s pubs into six categories:

His descriptions of various posh pubs and of some of the pubs he recommends for women suggest that gastro-pubs had their genesis in this era — “serves very decent food, far better than the average pub meal (though naturally priced accordingly)”; “both setting and clientele are almost exaggeratedly decorous”.

It is the so-called rough pubs that sound most intriguing, though. Dirty Dicks opposite Liverpool Street had dead cats, cobwebs and sawdust for decor. Charlie Brown’s (the Railway Tavern) on West India Dock Road housed a “collection of Curiosa” from all around the world (sadly sold off in the late 60s). And of the Steps (the Custom House Hotel) on Victoria Dock Road, Davies says: “It is not unusual to see somebody almost kicked to death outside.”

The illustrations in the book are by world-famous knitting pattern designer Kaffe Fassett. You can pick up a copy of the New London Spy for next to nothing at abebooks.co.uk if you want to read more.

Richard Keverne’s guide to England’s historic inns was first published in 1939. Hammond Innes revised the book in 1947. In his introduction, Innes makes the rather poignant observation that a new edition was needed not only to help returning servicemen reacquaint themselves with the country they’d fought to defend, but also to edit out mention of pubs which were destroyed by bombing during the war.

There’s further poignancy in reading about pubs which have great histories; which, in 1951, were still charming; but which are now plasticky chain pubs selling microwaved food (The Ferry Boat Inn, Tottenham, for example).

For all this book has about it the whiff of conservatism (there are lots of wistful comments about the simplicity of life in the ‘old days’) the author is surprisingly sympathetic to the motives of generations of innkeepers who destroyed the historic interiors of their pubs for commercial reasons.

Of particular interest to beer geeks are the rare passages which actually touch on beer. The Bell at Orford Hill in Norfolk, for example, was apparently a pioneering outlet for porter in the 1750s:

Sam Barker [the landlord]… also appreciated the use of advertisement. He advertised the then comparitively new malt liquor, porter. “A truly British liquor,” he called it, of which he had “a large quantity always bottled and fit to drink.” He offered it at five shillings a dozen (thirteen bottles to the dozen) or three shillings if you returned the bottles.

Keverne also tells us that the Sun Hotel in Hitchin, Hertfordshire, was typical in having its own brewery in the 18th century:

You should not leave the Sun without wandering through its big gardens, and seeing how the old malt and brew houses, alas! no longer in use, reminders of the days when the inn brewed its own beer. Then you will realise how vast were the resources of the big coaching house.

On the whole, it’s just a long list of pubs connected by vague anecdotes, usually unsourced, about Regency dandies and pub landlords. It’s not much use as a travel guide unless you are particularly interested in pub architecture. Nonetheless, it does give a great sense of just how much of a part of Britain’s infrastructure pubs (but specifically inns) really were, and reading about one village pub after another is almost as relaxing as spending an afternoon in one.

You can get copies of this book from around 80p at abebooks.co.uk. We bought our copy in an Oxfam book shop.

What do you buy a beer lover for Christmas, other than beer?

2. Some glassware. You can pick up branded Fuller’s glasses for around £4 in most of their pubs. Many supermarkets are selling gift sets with branded glasses from Shepherd Neame Spitfire, Old Speckled Hen and other well-known brands. Or, you can go posh — here’s a selection online. I like the look of these but could also do with one of these to drink imperial stout from. 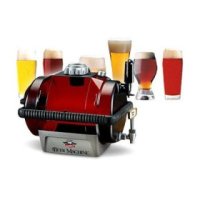 3. A homebrewing kit. There are some basic, gimmicky automatic brewing machines, which look like fun. Or, you can buy a decent beginners kit from these people and pay less for it. But don’t forget to get a decent book to go with it.

4. More homebrewing stuff. If your loved one is already brewing, why not help them take it to the next level with some fancy kit like a 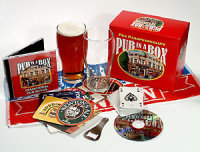 5. There are all kinds of “pub at home” kits and accessories, from the cheap and cheerful to the ludicrously elaborate and expensive. If you don’t fancy having any of that in the house, what about the shed…?

6. Some rare and, erm, beautiful breweriana from Ebay might go down well. Not sure I’d want a load of old bottle tops for Christmas myself, but who knows what evil lurks in the minds of men.

7. What about the ludicrously named World’s Best Bottle Opener? Or even a nice traditional one. You can never have too many. Like umbrellas, they have a habit of disappearing. Just don’t buy a Homer Simpson novelty bottle opener. Believe me, the novelty of hearing “mmmmm, beer” wears off after, ooh, two bottles or so.

8. What about some food to accompany beer, or a combination of the two? O’Hanlon’s port stout and stilton; almost anything Belgian with some chocolate; or some pork scratchings…

Good gifts are increasingly popular. If there’s too much junk in your house anyway, and you don’t want to encourage your loved ones to get fat and drunk, why not buy a brewery in Tanzania on their behalf?

11. And finally, if you are going to buy beer — and, let’s face it, it’s probably your best bet — choose them with a theme such as strong stouts, Christmas beers, German beers, or whatever, and package them nicely.