It was my birthday recently and naturally I celebrated by consuming a lot of very nice beer at various venues, with various people. We didn’t take detailed tasting notes but here are some summarised thoughts:

This month we’ve been asked by Rob D’Anunzio of Pfiff! fame to go against the grain and drink something not in season. Of course, the additional challenge for British bloggers is to determine what season we’re actually in at any given point in time…

Rather than go for a particular style, we raided our stash for Christmas beers.

First up was one that’s intrigued us for a while – Chapeau Christmas gueuze from Brouwerij de Troch. Now I always think of gueuzes as being a pretty summery drink, particularly when they’re lovely and fresh on tap. So the very existence of this beer seems anti-seasonal and in the spirit of the session. Reviews on Ratebeer and BeerAdvocate range from “weird” to “rank”, so we really didn’t know what to expect. It’s not actually bad – it smells and tastes like a fairly uncomplicated cherry beer, one of the sweet ones. If you’ve had, and liked, Timmerman’s or Boon Kriek, you won’t be disappointed. We’re not sure what’s wintry about it – maybe you’re supposed to mull it?

So onto Glad Tidings, a “spiced milk stout” from the Chiltern Brewery. I’ve heard many great things about this brewery but have never tried their stuff on tap or in bottles – strange considering they’re not that far out of London. This Christmas stout is 4.6% and has a gorgeous head. This is a very interesting beer – we can’t quite decide if it’s genius or amateur. They’ve rather gone to town on the Christmas spices, which dominate the nose and the aftertaste. There’s also a strong fruit flavour – probably from using oranges? Or maybe plums? It tastes a bit peachy, almost sour. It’s got a great body too, and a head that lasts – we have condition envy! Worth trying again, and definitely worth getting our arses out to deepest darkest Bucks to see what else these guys are up to. 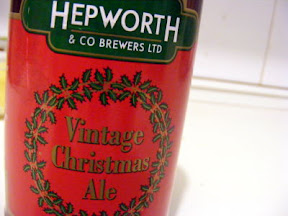 Remaining in the UK, we have Hepworth‘s Vintage Christmas Ale. They claim this 7.5% beastie will keep for years, and we wonder if we’re being premature drinking it two years before its best before date. It pours a glorious clear red, with a nice creamy head. The taste is difficult to describe, but it’s extremely fruity and warming. I was reminded of something like Bigfoot Barley Wine, except without the C-hops, if that makes sense. It has a gooey body, with a really good solid malt flavour. It’s a little nutty with hints of vinous fruits and oranges, and a beautifully balanced hop flavour cuts through but doesn’t overwhelm. Lovely stuff.

We were going to have a Sierra Nevada Celebration Ale to top the evening off, but I can’t see how it would beat that. So we’ll leave it there, with the long chewy aftertaste of Hepworth Christmas ale lingering on.