‘The Other Fellow’s Job No. 10: The Maltster’ by Richard Hilton, House of Whitbread, Spring 1955, with photographs by P.M. Goodchild.

“In these modern times, when machinery has largely replaced the hands of the craftsman, one might think that the ingredients of beer are largely subjected to numerous mechanical processes in the course of their evolution. And many of them are — but the malting process is one that has stood the test of time, and remains the secret of the craftsman who transforms the corns of barley into that most valuable ingredient of all — malt.”

“When a new load of barley arrives at the maltings, the first men to handle it are the granary hands. It is their job to dry the barley to about 12 per cent of moisture so that it can be kept in bulk without deterioriation; next, they clean and ‘screen’ it to extract the small or broken grains… Typical of the granary hand at the Whitbread maltings in East Dereham in Norfolk is Chris McCabe. An Irishman, 64-year-old McCabe started with Whitbread’s eleven years ago, and takes great pride in his work…. Before he came to East Dereham he worked in large maltings in Ireland.”

END_OF_DOCUMENT_TOKEN_TO_BE_REPLACED

Unlike some (Melissa Cole, p6; Mark Dredge), we don’t object to the use of the terms ‘malty’ and ‘hoppy’ as over-arching descriptors, but one thing does bug us: ‘malty’ shouldn’t just mean ‘not hoppy’.

Malt flavour is a positive addition to the flavour of a beer, giving it another dimension. The best hoppy beers — that is, those with a pronounced flowery hop aroma and/or bitterness — also have malt flavour, usually sneaking up as a bonus in the finish.

These are the kind of things we think of (no doubt via Michael Jackson and others) when we spot that taste:

It’s dry as in crisp, savoury but not salty, and just downright wholesome.

The best of the lagers we mentioned yesterday all have veritable maltiness, as do many of the pale-n-hoppy c.4% cask ales at which North of England breweries seem to excel. Our local equivalent, Potion 9 at the Star Inn, is defined by bright citrusy hops, but it’s that bread-crust and cream cracker snap that ultimately makes it so satisfying — the bun without which a burger wouldn’t be half as enjoyable.

A beer with fairly restrained hop character might allow the malt to take centre stage, and that can be good too.

But some beers aren’t hoppy or malty — they’re just sugary, gritty, vegetal or (worst of all) watery.

Don’t blame malt for that.

We haven’t drawn any firm conclusions on this subject yet, but see what you make of these quotations. (Our emphasis throughout.)

“For this reason ‘whole’ corn meal, which contains the germ, will have a greater life-containing, life-giving quality than the ‘degermed’ cornmeal found in supermarkets. Whole cornmeal is a “live” food — it spoils when the oil in the germ becomes rancid. Degermed cornmeal is a ‘dead’ food, as it lacks the germ (of life). Hence, it can be kept on grocery shelves for months without spoiling, though like all milled grains it does become stale.” Edward Espe Brown, Tassajara Bread Book, 1970.

“…’natural foods’ now threaten to replace ‘gourmet cooking’ as the main topic of food conversations… More than just a revival of old familiar food fads, this is part of the general concern now felt about the deterioration of our environment. Boredom with too much smooth, bland, overprocessed and sweet food has helped to attract not only the expected faddists, hypochondriacs and axe-grinders, but at least a proportion of scientists, especially nutritionists and conservationists.” ‘From Cranks to Nuts’, The Times, 7 August 1971.

“We opted at first for a high strength bitter brewed just from malt, hops, yeast and water. As well as being more wholesome this would also be simpler to produce.” Martin Sykes recalling the founding of the Selby Brewery in 1972, Called to the Bar, 1991.

“…the adulterated sludge that is glorified under the name of keg.” Michael Hardman, CAMRA’s What’s Brewing?, June 1972.

“The first distinction that must be made by the discerning drinker of draught beer is between keg, top-pressure, and traditional (the Real Thing)… traditional beer is alive while keg ber, like most bottled beer, is dead.” Richard Boston, ‘The Quick and the Dead’, The Guardian, 25 August 1973.

“British brewers are practically free to tamper with their beer as much as they want, unlike their colleagues in West Germany, who are forbidden by law to use any ingredient other than malt, hops and water… Fortunately, many brewers in Britain have kept faithful to nature, and beer brewed and served naturally can be found in nearly every corner of the country.” Michael Hardman, Beer Naturally, 1978.

“‘Real ale’ is the popular name for traditional beer brewed for centuries in Britain from malted barley and hops, with hundreds of regional variations in recipe and taste… Many brewers, big and small, use adjuncts in the brewing process. Flaked maize, potato starch, pasta flour, rice grits, malt and hop extracts will probably do you no harm but they are detrimental to the flavour of the beer.” CAMRA Good Beer Guide, 1978.

Boak: This has a really nice malt flavour — that grainy, chewy breadiness—

Nearby Bloke: Err… correction! It’s obvious this is made from only pale malt which contributes exactly zero flavour to a beer.

Nearby Bloke: (Sensing that he’s being humoured) No, seriously, and I should know. I’m a beer expert myself.

We sometimes move in geeky circles, it can’t be denied, and we geeks occasionally struggle with some elements of human interaction. Aggressively correcting people is one of the worst habits of the hardened geek.

Nearby Bloke could have started the above conversation with: “Excuse me, I was interested in what you were saying there, because I’ve always understood that pale malt contributes little flavour to a beer….”

Even if you are one hundred per cent sure you’re right, what is to be gained from entering a conversation with a bullish cry of WRONG! and a hectoring tone? It leaves you nowhere to go but redder, shriller and weirder.

PS. Another bad habit of geeks: referring to large groups of people as ‘sheep’ or ‘idiots’.

When we asked how Belgian beer could be so cheap, Matthew Curtis suggested on Twitter that their tendency towards relatively conservative hopping could be part of the answer.

This got us thinking. After all, though hop aroma is not something we especially associate with Belgian beer, it is certainly not the case that Belgian beer is bland or homogenous.

Hops are great — we love them — but their amount and variety are far from being the only variables a brewer has to play with.

In fact, two beers made with simple pale malt and ‘boring’ Fuggles could end up tasting and looking completely different, and equally mindblowing, if the following variables were carefully manipulated by a skilled brewer. (Or screwed up by a lazy one.) 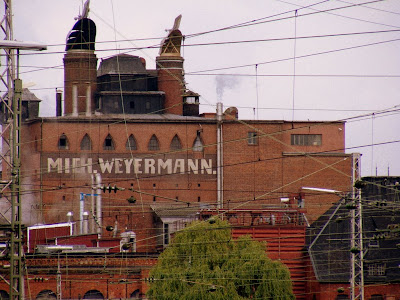 We’re all used to judging the aroma of the beer we’re enjoying, but it’s rare to be able to enjoy the aroma of the town where it’s being made. Bamberg is fairly small and so dominated by brewing that the very air is full of it.

When they’re making Rauchbier, the air fills with the smell of smoke, making a summer evening feel rather autumnal.

At the other end of town within sniffing distance of the colossal Weyermann malting plant, every time the breeze blows there’s a powerful scent of toasting, sugary grains in the air.

This post over at Appellation Beer made us think again about beer’s status in the world.

A lot of people see it as a basic right in life. They get annoyed when it’s taxed and/or the price goes up.

Unfortunately, it’s a heavily processed product. Yes, beer is a processed food. And like all processed food, it is very energy intensive. Think about the energy used in growing barley; malting the barley; mashing the barley; throwing most of it away and boiling the remaining liquid; chilling the remaining liquid; moving, storing and distributing the the finished product, sometimes to the opposite side of the world.

And then, nature takes a funny turn for a year or two, malt and hops go up in price, and we suddenly find that what once we drank as a cheap alternative to clean water has become an expensive luxury.

So, beer really ought to be expensive, and we probably ought to consume it more thoughtfully.

What options do the brewers and distributors have for keeping the price down? Reducing the quality, for one. Or squeezing the people in the supply chain, as in this depressing tale from Tyson.

Personally, we’d rather pay a fiver for our pint than damage the planet, or people’s livelihoods. Is that what it’s going to come to?

For a lot more on related topics, from a more learned writer than us, see Chris O’Brien’s Beer Activist blog.

Two years ago, I didn’t know what crystal malt was. Now I can’t escape the bloody stuff.

Crystal malt is dark, but not black, and kilned with the express purpose of giving beers colour and sweetness. Many great ales use it in moderation. Unfortunately, as we discovered whilst brewing our own beers, too much of the stuff can overpower a beer and leave it tasting rather sickly, because crystal malt has some sugars that can’t be fermented.

And sickly is how I’ve found a few microbrewed beers recently, mostly, I think, because they’ve overdone the crystal. The giveaway flavour is a kind of burnt, treacley, toffee-like, musty taste. Beers that boast “massive malt flavours” on their somewhat amateurish labels seem to be the worst afflicted.

The over-use of crystal malt is just as likely to unbalance a beer as that other ingredient which brewers are currently adding in careless handfuls — American citrus hops — only it’s harder to spot.

Time for a bit of tasteful restraint with both, I reckon.