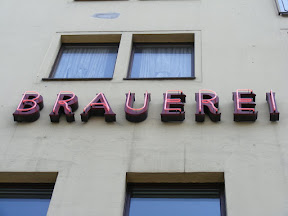 Entepreneurs trying to start breweries/brewpubs in Germany seem rather torn about the way to market their beer. Many just go straight for the Olde Worlde market, using gothic typefaces to explain how their beer may be something like something that was once brewed in the area and how they’re carrying on a grand tradition. They fill their pub with dried hops and bits of breweriana, load the menu with pork, and hope you’ll go along with the pretence.

Others (for example, the excellent Bar Fuesser in Nuremberg) are more willing to admit their recent roots – they may experiment with trendier typefaces, diversify the decor, and perhaps even offer a vegetarian option in amongst the ten cuts of pork. However, there will still be plenty of reassuring nods to “tradition” – a copy of the Reinheitsgebot in germanic script seems obligatory, for example. Even the modern pubs can’t help themselves indulging in mock-historical “fuckery-foo” (thanks, Charlie Brooker).

But we’ve never come across a place so confused as “Brauhaus & Backwerk”, a pub belonging to the Welde brewery, right on the main square in Heidelberg.

We’d done a bit of research before we came about pubs and breweries in Heidelberg, but hadn’t heard of this one. Naturally, our attention was grabbed by the fact it appeared to be offering its own beer. Inside, the place was done up like a tacky medieval theme-park, but they did list five or six types of beer on one of the mock velvet scrolls, so we sat down despite the fact it was almost deserted. 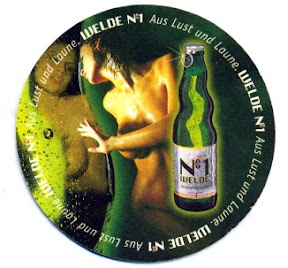 The menu was all mock-medieval too, with dishes for “our little knights”, for example. We assume that referred to children? Like many pubs in Heidelberg, they were clearly trying to cater to the Japanese and Americans “doing Europe” by offering beer by the litre and pretzels, Bavaria-stylee.

However, we then noticed this dreadful beer mat (above), which was totally at odds with the rest of the branding of the place. We couldn’t work out whether it was supposed to be a trendy brewpub, a tourist trap, or possibly a brothel.

Only one thing for it – try the beer. In amongst the usual pils and weizen, they also offered a dunkle-weizen (“Schwarze Wonne”) and a Zwickl, which sounded more exciting than it was. The beer was drinkable, although tasted a bit home-brew-like, as with many trendy brewpubs in Germany. We wondered if the pub would be better off located outside the main part of town, where they could drop all the faux-medieval stuff and concentrate on the beer and the home-made bread.

I’ve since had a chance to look at their website. You can find it here, but I warn you, you’ll be greeted by a dreadful jingle and a video featuring naked ladies. I’ve seen some pretty tacky sub-porn on German beer sites before, but this takes the biscuit.

For those of you that haven’t followed the link (well done!), I can tell you that you don’t need much German to understand how Welde want to market their beer. There’s little mention of the range of products, and a lot of mentions of ladies with bierdeckels for bras.

Talk about a confused marketing strategy. If you’re just going for the saucy angle, why bother making a Zwickl and other seasonal specials? If you’re proud of the beer, why undermine it with awful gimmicks or cod-medieval toss?

“Brauhaus & Backwerk” is right opposite St Martin’s Church in the main square, next to a kebab shop with pretensions. We may have the name slightly wrong, but you can’t miss it. We rather enjoyed the pils, tacky marketing or not.

Heidelberg does have loads of great pubs and interesting local brews, so we’ll put up some more about it in due course. 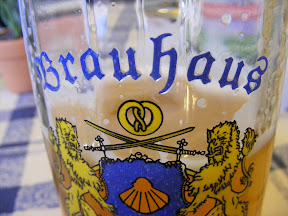 We were tipped off the existence of a second, out-of-the-way brewpub in Mainz by this website.

Brauhaus Castel is in Mainz-Kastel, on the other side of the Rhine and technically in another state (Hesse, rather than Rhineland-Pfalz). We walked, enjoying the beautiful sunset over a river full of huge cargo barges, and the sound of Greece vs Russia on the air from the open air screens by the river.

It took a while, once we’d detoured around the, erm, ‘grey’ bit on the map.

It’s got a great atmosphere. Perhaps a bit kitsch inside, but with some nice trellises and plants outside that create a far more Arcadian feel than the industrial-estate surroundings might suggest.

The beer? Not so good, to be frank. The dunkel reminded us of our homebrew (not always a good thing) and had too much crystal malt. The EM Special (a European Championship seasonal) was a bit sweet, boasting “light hopping” on the menu. The wheat beer was the best of the bunch, with lots of banana aromas and a nice punch of bitterness.

We can’t, in all honesty, recommend trekking out here, but if you’re stuck in Mainz for any length of time, or are just an incorrigible ticker, it’s worth a visit.

Our top tip: the much more convenient and just as idyllic beer garden in the grounds of the Roman museum by the river (on Grosse Bleiche), where we very much enjoyed the Erbacher Pils. It looks like another dull regional lager, but knocked our socks off with a lot of bitterness and tons of what might almost have been Goldings aroma. We were surrounded by grand, red baroque buildings and serenaded by a scarily proficient youth orchestra. And, what’s more, a proportion of our spend went to maintaining the museum.