Lately, we have become aware of an Achilles’ heel in our attempts to think and write about how beer tastes, as opposed to its history and the culture that surrounds it.

On the rare occasions we declare a beer to be downright bad, off or wrong, we find ourselves pressed to be more specific — to describe what we’re tasting in the technical terms brewers use amongst themselves.

We’re not Heriot-Watt graduates and have never even been on a short course. Anything we have learned has been from books. It’s hard to beat words as a means of conveying sensory experiences, but even they can’t compete with experience.

We know quite a lot of the terminology and apply it, but not with great confidence. We get corrected a lot. (Corrected? On the internet!?) Our lack of confidence means we have to bow to those corrections even when, as if often the case, we secretly think we’re right.

Perhaps we’ve resisted getting technical to an extent: knowing the language doesn’t always mean a lot, and we’ve more than once been cornered by bores who know all the jargon and yet seem happy to drink pints that have turned us green with nausea.

And, insofar as we enjoy reading other people’s beer reviews, it’s those with evocative prose rather than the ones that resemble feedback sheets from a home brewing competition.

Anyway, we’re doing something about it now: we’ve just splashed £90 on an ‘off flavours’ kit from Aroxa.

That’s £90 — enough for a case of very decent beer — for some pills that will make our beer taste nasty. The things we do in the name of blogging…

In 1975,  Dave Bennett, a member of the Campaign for Real Ale, proposed a formalised ‘vocabulary of taste’ for beer to rival that used by ‘wine snobs’.

It seems to have been a publication of some sort, and we’ve put out feelers to confirm that, and perhaps get sight of a copy.

In the meantime, we’ve gleaned from the Daily Mail of 17 February 1975 that Bennett attempted to dodge accusation of pretension by suggesting that beer should have a ‘smell’ instead of a ‘bouquet’, and proposed the following rather down-to-earth flavour descriptors:

Treacle, mice, metal and grease? Not so much French château as the two-up-two-down terrace. We rather like ‘brothy’, even if we’re not quite sure how it applies to beer.

It would take another ten years for anything like this approach to take hold within CAMRA, and then not without opposition (for more on which see Des De Moor’s essay in the 2011 anthology CAMRA at 40).

This post is something of an extended footnote to a passing observation we have made in the first draft of our book. Expect more of these in the months to come.

A couple of weeks ago, we got an email out of the blue inviting us to speak at the Eden Project’s food and drink festival. Yesterday, we gave the first of two talks on how beer is made and how to spot the influence of malt, hops and yeast on the taste of beer.

There are few nicer places to spend a grey day than the Mediterranean biome at Eden and it was there, surrounded by fragrant citrus trees, that we did our turn. We used St Austell HSD to demonstrate ‘maltiness’; a German wheat beer to demonstrate the impact of yeast; and Oakham Green Devil IPA to illustrate the power of hops. We also passed around dried hops for rubbing and sniffing and pale malt for nibbling.

It was great fun for us, not least because it gave us the chance to talk about beer with people who aren’t as obsessed with it as we are. (Not yet, anyway.) We had fretted over whether our talk was too basic or even patronising but it seems not. Members of the audience:

We’re doing the talk again next Saturday and can’t wait. There is a bit more work to do, though, as we need to come up with a good answer to the question which left us scratching our heads: “How come there are hundreds of new breweries but fewer and fewer pubs?”

Those who are in the Cornwall on their hols and like Sharp’s beers might be interested to know that, for the duration of the festival, Eden are also offering what looked like the full cask range, available in tasting ‘flights’. They also have the full bottled range, and we can personally vouch for the excellence of Sharp’s Belgian-style Honey Triple and Quadruple Ale.

This was a paying gig. The beers were bought by the Eden Project from our shortlist. We haven’t been given free samples of any of the beers we used; but we didn’t pay for the Oakham Green Devil that knocked our socks off the other week, which was donated by the landlord of the Star Inn from his personal stash.

We’re as tired of the fetishisation of hops as much as the next blogger but, despite that, the two beers that have made us sit up and take notice lately have both been showcases for bold hopping.

A couple of weeks ago, we spent a happy afternoon in the back room of the Star Inn, Crowlas, helping Darren ‘Beer Today’ Norbury work through his stash of free beer. The stand out of that session was Oakham’s Green Devil IPA (6%).

When we opened it, a wisp of vapour appeared at the neck, and then the aroma hit us, like smelling salts. If it had been a cartoon, there’d have been green tendrils in the air, curling their way into our noses and throats. Dave, who Darren mentions in his post, isn’t totally convinced by either super hoppy beers or by ‘tasting’ as a pursuit, but even he couldn’t stop himself exclaiming, wide-eyed: “Nettles! Freshly cut grass! Herbs!”

Those cartoon pong trails made a second appearance at the beer festival at the First and Last in Sennen, near Land’s End, last weekend, when we bought our first pints of Moor Nor’Hop (4.1%). Even with a gale blowing; in typical headless festival condition; and from a plastic cup, the fantastic aroma of the beer reached us long before we lifted it to our lips. Can we measure aroma by height? Nor’Hop’s was a towering 75cm or so.

Nor’Hop is also unfined, making it the first such beer we’ve consumed in the wild. Its cloudiness didn’t put us off and might have contributed to a sense we had of its ‘juiciness’; but we think it would probably have tasted just as nice clear. Once we’d found it, we stuck with it, and drank nothing else until it was time to get a bus home through the fog. 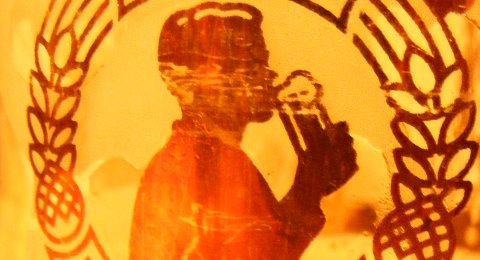 We’ve written about the variables in beer before, but this post on beer styles by Jeff ‘Beervana’ Alworth made us think more specifically about the tiny variables. These are the things that, on their own, might not be missed but which, together, add up to a unique fingerprint for a beer.

You can measure a beer’s attributes and replicate them and declare it ‘technically the same’; and you can categorise a beer and brew something which matches the ‘profile for the style’; but it’s the sometimes barely perceptible contributions from people, process, place and ingredients that make it what it is.

Chemists can synthesise strawberry flavour by breaking down its chemical components or make artificial musk for perfume. Technicians can replicate the sound of a violin or human voice with synthesis and samples. But, for now, what they end up with is something that works in the mix, if you don’t pay too much attention, and which will never satisfy someone who really knows their stuff.

Without the small details — flaws or wrinkles? — a beer can end up in the uncanny valley.

Could we honestly spot the difference between food-grade acid added to a beer and that which occurs naturally during fermentation and maturation? Honestly, maybe not, but we have tended to perceive added complexity in the beers made with the most roundabout, time-consuming, arcane processes.

Bonus points to anyone who can identify the brewery from the ‘small detail’ in the picture above...