We all know Nipper, the HMV dog, forever captured with his snout down a gramophone trumpet – but did you know he also advertised beer?

Nipper was born in Bristol in 1884 and died in 1895. His first owner was Mark Barraud, a theatre scenery designer; his second was Francis Barraud, a painter, who immortalised him in the image we all know today.

But on another occasion, Nipper was painted investigating not a gramophone but a glass of stout – and that image was famous, too, in its day.

As always, piecing together chronologies is difficult, but what we think happened is that Nipper became an early example of a meme.

First, in around 1900, Nipper became the trademark of the His Master’s Voice and Victor gramophone companies.

Then, at some point in the following decade, Watney, Combe, Reid & Co. (hereafter just Watney’s) came up with the slogan ‘What is it master likes so much?’ From bits we’ve been able to piece together, we think this was supposed to be in the voice of a household maid, purchasing bottled beer on behalf of the man of the house.

Then, in around 1910, Watney’s bought, or more likely commissioned, two paintings from Barraud, mashing up the HMV trademark with their slogan to create this campaign:

This campaign apparently ran for months with posters up all around London, on trams, and on tram and bus tickets, and seeped into the national consciousness.

One national newspaper felt justified in saying in 1914 that Watney’s was primarily ‘familiar to the man in the street by that famous poster, What is it Master likes so much, which is undoubtedly one of the most successful pictorial advertisements on record.’ (Globe, 27/02/1914.)

We doubted that at first until we discovered the music hall song and this account of a particularly weird-sounding theatrical performance at a village not far from Land’s End in 1910, as reported by the Cornishman:

On Saturday a very successful entertainment was given at Cliff House, Lamorna, by kind permission of Mr and Mrs Jory, in aid of the Buryan District Nursing Society. The principle feature of the entertainment, which was organised by Mrs Alfred Sidgwick, was a most artistic series of living pictures designed and arranged by Miss Barker of London… The second picture, ‘What is it master likes so much?’ suggested by a well-known poster, had a clever fox-terrier, Jimmie, as its central figure, investigating his absent master’s luncheon table. Jimmie proved himself an actor of rare gifts of facial expression, and greatly amused his audience…

There were lots of parodies and pastiches of Barraud’s Nipper paintings, including this by Philip Baynes from the Bystander for 14 February 1912, which brilliantly highlights the oddity of having the same dog advertising two quite distinct products:

For all Watney’s seemed proud of these early forays into modern advertising, when the Red Barrel and What We Want is Watney’s came along between the wars, Nipper got sent to the pound.

The campaign is mentioned in both official company histories, from 1949 and 1963 respectively, but only in passing.

If you know more about this campaign, do comment below.

Can you see spot what drew us to the tatty old postcard of Main Street, Haworth, West Yorkshire, from the 1960s, reproduced above?

That’s right – it’s the advertisement for Watney’s, neatly camouflaged against the brick wall to the left, above a yellow enamel sign advertising St Bruno tobacco.

This particular Watney’s ad campaign ran from as early as 1937, as explained by Ron Pattinson here, along with details of why this design was so successful. Ron also provides a lovely image of the poster which we’ve taken the liberty of nicking:

The really interesting thing about the postcard, though, is that this poster should have appeared in Yorkshire, 200 miles from the brewery’s home in London.

In the 1960s, Watney’s grew and took over regional breweries around the UK. It took over Beverley Brothers of Wakefield in 1967 and began investing in Webster’s of Halifax at around the same time, taking it over completely in 1972.

So the poster in the postcard is a symbol of the arrival of national brands, and of the homogenisation of beer that triggered the founding of the Campaign for Real Ale in the 1970s.

But it’s not all one-sided: if you look closely, you might be able to pick out a small enamel sign advertising Tetley’s next to the Watney’s poster. That, too, would become a national brand, taking a taste of Yorkshire to the rest of the country.

You can’t have cops without robbers, or Batman without the Joker, and so the story of the revitalisation of British beer needs its bad guys too. Enter Watney’s.

Watney’s (or Watney Mann, or Watney Combe Reid) was the Evil Corporation which sought to crush plucky small brewers and impose its own terrible beer on the drinking public. It acquired and closed beloved local breweries, and it closed pubs, or ruined them with clumsy makeovers.

Its Red Barrel was particularly vile – a symbol of all that was wrong with industrial brewing and national brands pushed through cynical marketing campaigns.

This, at least, was the accepted narrative for a long time, formed by the propaganda of the Campaign for Real Ale in its early years, and set hard through years of repetition.

But does it stand up to scrutiny? What if, contrary to everything we’ve heard, Red Barrel was actually kind of OK?

END_OF_DOCUMENT_TOKEN_TO_BE_REPLACED

This selection of post-war pubs comes from 1961 editions of in-house magazines from two London brewing behemoths, Watney’s and Whitbread.

To reiterate what we said a few weeks ago, the primary point of this series of posts is to put the material in these publications somewhere where other people can find it. And, for clarity, we should say that these pubs weren’t all built or opened in 1961 — that’s just when the magazines covered them. Where a date of construction or opening is given, or is available from another reliable source, we’ve included it, along with the names of architects and photographers where possible.

This Whitbread pub was the permanent replacement for a prefab that was erected as a stopgap immediately after World War II. The lounge, in black and white, was decorated with reproductions of paintings of chickens, the Buff Orpington being a breed of hen. The tap room (public bar) had lemon walls and a red and blue tiled floor — so, something like this?

Is it still there? Yes, under the name The Buff, and it’s yet another post-war estate pub run by Greene King who seem to be keeping it in good nick, even if it has had some faux-Victorian bits glued on.

The original pub of this name was at Chatham, near the Royal Engineers’ barracks. This new pub — a fairly handsome building for the period — was built by Whitbread as part of the shopping centre on a new estate at Twydall:

Where in the old house were shutters and frosted glass are now clear panes and airy louvres. Special attention has been paid to heating and ventilation; a pleasing feature is the lighting — more and smaller bulbs giving brightness without glare. Richly hued woods in servery, counters and doors set off with light paint and wallpaper… An unusual feature is the porcelain handles of the beer pumps. On each is a reproduction of the inn sign.

We can imagine some people reading that thinking that the shutters and frosted glass sound much nicer.

This one is no longer in operation having been turned into a takeaway restaurant fairly recently, it seems.

END_OF_DOCUMENT_TOKEN_TO_BE_REPLACED 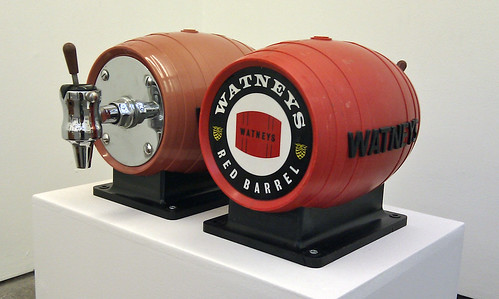 Every day, we come across something from thirty or more years ago which chimes with present-day issues in the world of beer. Here are a couple of related notes.

Observation 1: big breweries in the 1970s struggled to find a satisfactory approach to the ‘real ale craze’ just as the ‘leisure beverage’ companies they became are grappling with how to get in on ‘craft beer’ today.

Watney’s approach to real ale has so far been muted. It has experimentally introduced at a few of its London pubs, at 35p a pint, cask-conditioned beer brewed in Norwich. (It says its real beer travels.) There has been no big promotional fuss, and it is hard to see how there could be for a product whose appeal is that of not being a big-brewery mass-produced beer.

‘Real ale’ being more clearly defined than ‘craft beer’ meant big breweries could easily produce products that met the technical criteria, but what they couldn’t do was make beer geeks love them. It was certainly real ‘real ale’, rather than ‘faux craft’, and CAMRA gave wary nods of approval, but Watney certainly weren’t in from the cold. They’d been the baddies for too long, and their interest in real ale just didn’t seem sincere.

Observation 2: regional/family brewers have always muddied the water. How do you make sense of them as part of a vaguely hippyish smaller-is-better, stick-it-to-the-man ideology?

Mr Protz, a former member of the Socialist Workers’ Party, has been attacked by the far Left for his defence of the small independent breweries with their ‘often feudal labour relations.’… ‘The problem is that political people, including the Left in Britain, have not yet realised that politics and the Labour movement does not stop at the shop floor,’ Mr Protz argues. ‘Beer is part of the leisure industry, and the leisure industry, how people enjoy themselves, is about money and power and influence — just as much as a factory. The middleclass consumer and the working man have been getting a bad deal.’

The Big Six all had the DNA of family breweries, but had lost their humanity. Regional brewers, on the other hand, were only ever a step away from becoming bad guys themselves. A little growth spurt; a takeover here and a closure there; a little too heavy a hand with the brewery tie and… well, look at Greene King, who were heroes in the 1970s, but now seem to be villains.

Picture by Martin Deutsch, from Flickr, under a Creative Commons License. It was taken at an exhibition on the work of the Design Research Unit which we saw when it stopped off at the Tate Gallery in St Ives.