Sparklines are small line graphs without scales or labels designed to give a quick visual impression of a trend over time. They’re another Edward Tufte innovation and he apparently describes them as “data-intense, design-simple, word-sized graphics” — graphs that can be used like elements of type, without the need for plates or “See Fig. 12”.

But is the above graphic illuminating? More so than yesterday’s slopegraph, perhaps, but probably not as much as the traditional line graph below.

Next: the Rock Family Trees approach to understanding the relationships between British breweries.

Like Alan ‘A Good Beer Blog’ McLeod, we’re keen to see more meaningful attempts to visualise the sea of information that surrounds beer — that is, not just whizzy infographics heavy on the graphics but light on info.

In a recent post, Alan directed us towards the work of visualisation guru Edward Tufte, which led us to this excellent blog post on an early innovation of Tufte’s: ‘slopegraphs’.

So, here’s some of Ron Pattinson’s data, drawn painstakingly from the Whitbread archives, presented as a (crude) slopegraph.

First thoughts? Well, it doesn’t show us anything Ron wasn’t able to express better in words (IPA up, Mild declining surprisingly early), but it might be useful to some ‘visual learners‘. And, as Charlie Park points out, aren’t slopegraphs really just rearranged line charts? (They certainly are the way me make ’em.)

The chart above was created in Excel and exported to a graphics package for formatting and labelling. It uses a consistent scale, hence the big gap in the middle, which is, in itself, illustrative. UPDATED 02/05/2012: removed bounding box — see comments below.

It was once a dominant force in British brewing but Whitbread, as a brewery, no longer exists. The company runs hotels and coffee shops, but doesn’t have anything to do with beer.

Nonetheless, the name, and its connection with beer, lingers on.

A handful of the brands are still in production by various companies, under license from InBev who now own the rights. We’ve seen 275ml bottles of Light Ale in a convenience store in Clapton; bitter on the bar at an old pub in the East End of London; and, of course, supermarket four-packs of bitter and mild every now and then.

In Devon last year we saw a rusting advert for NEW Whitbread Tankard on the side of a boarded-up country pub.

And, on Saturday night, when someone nearby ordered a pint of bitter, as it was rung through the till, the word WHITBREAD appeared on its screen in glowing green letters for just a few seconds. Was it a ghost in the machine? No, sure enough, there on the bar, next to the lemonade, was a faded and chipped font for Trophy Bitter, which someone is evidently still making.

Whitbread’s other great legacy would appear to be its yeast: a kind of ‘stud’ which begat many of those currently in use by breweries all over Britain today. Wouldn’t it be nice to see someone brewing Whitbread’s long lost cask beers with it and bringing the name back from this odd form of suspended animation? 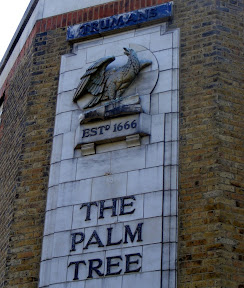 Terms like “a real old fashioned East End boozer” and “doesn’t look like it’s changed in decades” can be overused. But the Palm Tree, on the Regent’s Canal near Mile End, really does look as it must have done at the time of the Iranian embassy siege.

In fact, it’s reminiscent of the Queen Victoria from Eastenders circa the 1986 Den and Angie Christmas divorce special. 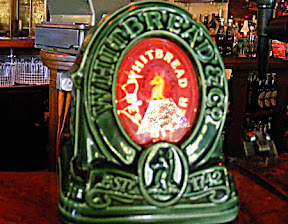 There are fonts for Whitbread Best Bitter and “Carlsberg Special Continental Lager”, as well as bottles of Whitbread Pale Ale behind the bar. There are a couple of real ales on, too, from the Brentwood Brewing Company and Archers. Is this a living museum, like the one at Ironbridge? Maybe.

Inside, enjoying the gloom and the cool, stale-beer-smelling air, there are a few older men sipping at pints from dimpled mugs.

Just to confuse things, though, it’s like a completely different pub outside. On a nicely mown meadow overlooking the water, there are about 60 would-be Pete Doherty’s, some young families and (oddly) loads of French people eating picnics and drinking from plastic glasses. It’s strangely idyllic and very 21st century.

Beer in the Evening has very mixed reviews of the place. For what it’s worth, we both had bags and there was no problem, plus the landlord was very happy to let us take some photos. Here’s a map.