We went to Cheltenham to look at buildings and so did no research whatsoever into pubs and beer, but luck was on our side when we found the Sandford Park Alehouse.

After an hour or two’s nosing around, we eventually got hungry and thirsty, at which point, we saw a sign outside a plain-looking, white-painted building: CHEESE TOASTIES £4.99. ‘That’ll do,’ we said, and went in.

Immediately, our Spidey-senses began to tingle: a map of Belgium? As in the country where the beer comes from? Our first glimpse of the bar confirmed our suspicion: somehow, we had managed to stumble upon Cheltenham’s own ‘craft beer bar’.

A bright, airy, multi-room pub with décor just cosy enough to prevent it feeling sterile, enlivened considerably by maps on every wall. It reminded us, in fact, of Cask in Pimlico before it got its corporate makeover.

There was also lots of beer, though the selection wasn’t as large as at some better-known bars, and was perhaps also (thankfully?) a touch more conservative. A row of hand pumps offered cask ales from multiple Golden Pint nominees Oakham, among others. We couldn’t fault the condition of Oakham Citra or Crouch Vale Brewer’s Gold, though we wish we hadn’t drunk them in that order. (You can’t come back down the hop-ladder.)

The real highlight was a kegged beer from Germany, via a row of taps behind the bar. Bayreuther Bierbrauerei Zwickl, at £3.90 a pint, didn’t seem exorbitantly priced (we pay £3.40+ for Doom Bar in Penzance) but we hesitated until the barman leaned over conspiratorially and said, ‘It’s served in one of these’, waving a narrow, handled ceramic mug. ‘People who like this beer really love it,’ he told us, and he was right. It was a Bavarian holiday in a jug — a little sweetness, gentle lemon-rind notes, and just enough dryness at the end to prompt another swig. It was probably (intentionally) cloudy, but we couldn’t tell, and didn’t care.

Once we’d got comfortable under a fascinating map of the Middle East, it was hard to move, and we drank one more than we had intended as we observed the crowd. The people around us were a little more middle-aged and tweedy than at the ‘craft’ places in Bristol, perhaps, but then that might just be Cheltenham. We, hurtling into middle age (though not yet into tweed), felt quite at home.

On the basis of this first visit, it felt as if the Sandford Park Alehouse might as well have been designed with us in mind, and, when we visit Cheltenham again, it will be with the specific intention of verifying that feeling with a second equally lengthy session in the same cosy corner.

The Sandford Park Alehouse is at 20 High Street, ten minutes walk from the city centre, and 30 minutes from the station.

Brauberger in Luebeck is a brewpub in a lovely old building in a quaint part of the old town. There are various implications that the brewery and the pub are pretty ancient although, when you get down to it, the beermats suggest it was founded in 2006.

Nonetheless, the keller is very cosy and their one beer, a hazy yellow zwickl served in tall  straight glasses with handles, is actually pretty good. It’s definitely a step up from the standard modern German brewpub fare. It has a distinctly yeasty flavour but in a good way — refreshing and slightly fruity rather than overpowering and dusty. A mild bitterness at the end makes it a lively accompaniment to the hearty food.

In short, don’t go out of your way to try it, but if you’re in Luebeck, Brauberger is definitely worth a visit.

Luebeck itself is a fascinating and sometimes beautiful place, if a little quiet after the Danish coach parties have departed. If, like us, you sometimes visit places for reasons other than beer, we’d recommend a night or two. 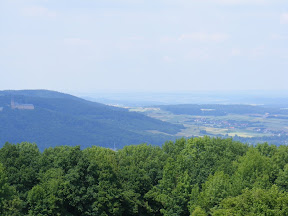 Contrary to what some guidebooks would have you believe, you can explore the Fraenkische Schweiz and get to many of the little breweries on your own two feet. There’s a useful branchline from Forchheim to Ebermannstadt, and loads of local buses. Best of all, there’s a network of (fairly) well marked paths, so with a good “Wanderkarte” you can improvise as you go along. Nowhere is particularly steep or tough going – you don’t need hiking boots or even expensive anoraks

There’s even a “Brauereien und Bierkellerweg” you can follow – it’s more designed for cyclists, but is a useful reference point

As a starting point, we bought “Ein neuer Wanderfuehrer fuer Biertrinker” by Dietrich Hoellhuber and Wolfgang Karl. They suggest 22 walks and profile around forty or fifty breweries and beer gardens. It’s a very useful little book, with hand-drawn maps, and important information about opening times of the breweries, and beer reviews too. Our German is not that great, but it’s not that difficult to follow the gist, although I do suggest getting a proper map of the area with the cycle/ walking routes marked to supplement it and work out where you are if you get lost

We tried walk 21, a circular walk from Pretzfeld to the supposedly amazing Penning-Zeissler brewery in Hetzelsdorf, having checked with the book that the day wasn’t a “Ruhetag”. It was a really lovely walk, through orchards of pears and cherries and fields of barley. Unfortunately, when we got to Hetzelsdorf, the brewery had decided that Monday was going to be a Ruhetag as well as Tuesday. Moral of the story – phone before you leave

However, having a look at the map and the book, we improvised a new route back, via the little village of Unterzaunsbach. After an hour or so of getting lost in a wood, we found ourselves outside the front door of Brauerei Meister. It appeared to be open. 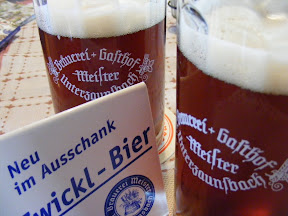 We went in, slightly nervously. There was an old lady sitting at the table, who must have been over a hundred. After greeting each other, she shouted into the kitchen, and a younger lady (still over seventy) came out to serve us. She was slightly bemused by us, but spotted our “Wanderfuehrer”, said something in an impenetrable local dialect (probably “I know your type”) and smiled.

The brewery does a Vollbier and a Zwicklbier on tap. We think that the Zwickl is an unfiltered version of the Vollbier, i.e. not a different recipe. Both were amazing, obviously. Very ale-like, both in colour and bitterness. Very full malt flavours infused with orange and perhaps some smokiness too. With the Zwickl, you seem to get the different flavours more slowly.

We said nice things about the beer, and she gave us a beer mat and a box of matches.
They do food and bierschnapps too. Incidentally, there’s a bus-stop over the road, so I imagine you could get a bus directly here from Forchheim too. But I bet the beer wouldn’t taste as amazing…

Brauerei Meister is at Unterszaunsbach 8, D-91362 Pretzfeld. I was very surprised to find that they have a website, which you can find here. I don’t think it’s been updated for a while, though.

Here’s a link to find out more about the Fraenkische Schweiz, including a list of 72 breweries in the area. 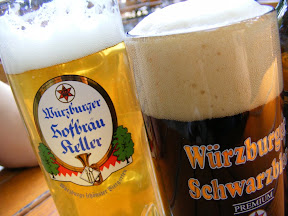